The aquatic world was an entirely aquatic level planned to make an appearance in Rayman 3: Hoodlum Havoc. Its official name is unknown.

This area was inhabited by the jellyfish-like Zaqs and other aquatic creatures. The aquatic world, had it survived into the final version of the game, would have been exploited by the Hoodlums, who would have set up a giant washing-machine in a lagoon. Rayman would have had to save the Zaqs from the Hoodlums, who filled them with washing-powder and used them to clean their laundry. Rayman would also have had to face eel- and fish-like creatures who would attack him.

The development team did not have enough time to create all of the worlds that were initially planned, and it was thought that the aquatic world lacked ‘rhythm’ when compared to the others. It has been speculated that the underwater section of the Land of the Livid Dead and the Looming Sea before the Summit Beyond the Clouds are all that remains of the aquatic world, and that Rayman's encounter with Céloche may have originally been planned to take place there. 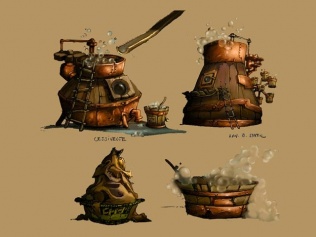 Concept art for the Hoodlums' washing-machine 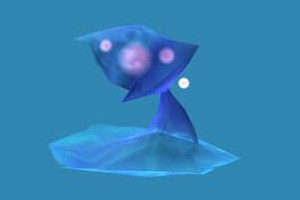 Official artwork of the Zaq 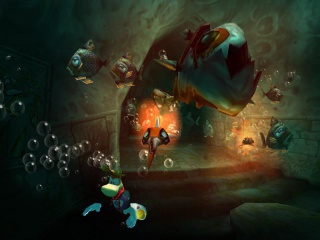 A screenshot of the scrapped underwater level, showing Rayman encountering a submarine of apparently Hoodlum design
Retrieved from "https://raymanpc.com/wiki/script-en/index.php?title=Aquatic_world&oldid=73008"
Categories: