The seas are looming, all right – looming with waves of weird watercraft that only the Hoodlums were insane enough to launch. Tread these waters with caution.
—Official description, Rayman 3 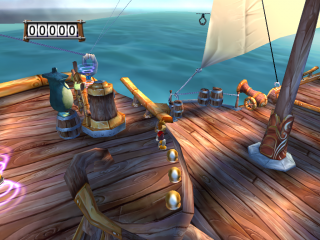 Rayman and Globox riding a ship upon the Looming Sea.

The Looming Sea is a sea somewhere in or around the Glade of Dreams. It lies between the Longest Shortcut and the Summit Beyond the Clouds. It is not known how the Looming Sea relates to the Sea of Lums, another sea mentioned in the Rayman series.

In Rayman 3, at the end of the last phase of the Longest Shortcut, Rayman and Globox receive a ship from the three Teensie doctors. The doctors tell the heroes that they must sail the ship to the Summit Beyond the Clouds, then find the Hoodlum Headquarters located somewhere high in the mountains. Once there, they must stop André and his minion, Reflux the Knaaren, whom he has persuaded to steal the Sceptre of the Leptys from the Knaaren king, Gumsi. If they are not stopped, they will wreak havoc on the Glade of Dreams with the power of the Leptys.

The next level is called the Summit Beyond the Clouds, but its first phase is spent entirely aboard the ship upon the Looming Sea. Globox steers the ship, while Rayman uses its on-board cannons to fight off the Hoodlums, who are attacking in their submersible vehicles. At the top of the ship flies a flag bearing Rayman's symbol. Once this phase is completed, Rayman and Globox disembark. The ship and the Looming Sea are neither seen nor mentioned again.

It is not known if the Looming Sea was ever intended by the developers to play a more prominent role in the game. The game was originally planned to include an aquatic world, but it was scrapped for reasons of time and budget; it is possible that the Looming Sea, as well as certain underwater sections of the Land of the Livid Dead, is a leftover from this stage of the game's development.