In order to be more like his hero Rayman, Teensy Ray cosplays as him, wearing a coat and a shirt with the same colour scheme of Rayman's shirt and hood, including the signature white "O". He also wears a pair of white gloves, and a pair of shoes similar to Rayman's. He also changed the colour of his skin with body art, and emulated Rayman's haircut with hair transplantation to practice the ability to use the helicopter; however, it doesn't seem to work for him. He and Globteen are the two cosplayer Teensies.

It's the head of the fanclub! Teensy Ray. Nice body art, my friend! Any luck flying with the new head implant? Don't try from too high...!
—Bubble Dreamer, Rayman Origins

In Rayman Origins he is unlocked once 15 Electoons have been earned. He claims to be Rayman's biggest fan, possibly due his heroic acts in previous games. The Bubble Dreamer recognizes him as the leader of a never before mentioned Rayman fanclub. Is unknown how many members does this fanclub have, where is it located or when was it created.

This little Teensy is the ultimate Rayman fan! He even dresses exactly like his role model and is Head of Rayman's fanclub.
—In-game description, Rayman Legends

In Rayman Legends he is unlocked once 5 000 Lums have been collected. 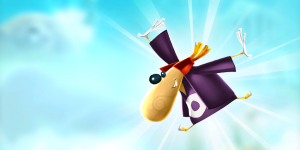 Teensy Ray as he would have appeared in Rayman Adventures.

In Rayman Mini he is unlocked for 25 Swag Coins.