The Winds of Strange

The Winds of Strange is the second level of Toad Story, the second world in Rayman Legends. Here in this darker part of the world, the team of heroes call on Murfy to assist in moving obstacles and slapping one-eyed creatures called wind monsters to produce air currents to advance.

This level is one big area. After advancing for a little bit, the heroes call on Murfy to help get by. He will be used a lot throughout the level in moving platforms and poking wind monsters. The first secret area can be found by going through a hole in one of the trunks. The team will keep advancing upwards with the help of Murfy. Sometimes Murfy can cut ropes the Toads are attached to, but this is not necessary. The first Skull Coin can be found by reaching a pillar then performing walljumps. The second secret area can be found to the left near the top of where the Skull Coin was. The second Skull Coin is hiding behind a leaf, near a Toad repeatedly jumping on a Teensie. Eventually, the team will reach the end and then count the amount of Lums they collected. 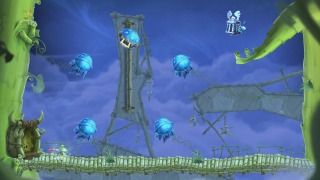 All the team has to do here is body slam on the first flower-like platform without the help of Murfy then they will reach the Teensie cage. 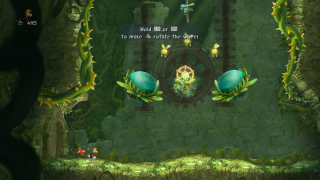 Murfy needs to rotate the flower bumpers so the team can reach the Teensie wrapped up in a rope.

This level is invaded by enemies from 20,000 Lums Under the Sea, including Underwater Toads and Sharkmen, and Dark Rayman.

The exact location of the invasion compared to the original level is unknown, the level is probably a new level based on the patterns of the original one.

The player must climb -like in the Infinite Tower- using bumpers and walljumps, and avoid Dark Rayman who is reproducing the movements of the player (or the player leading the way when there are at least two players). Some enemies will stay to bother the player(s).