Enchanted Forest is the third level of Teensies In Trouble, the first world in Rayman Legends. The level takes place in a dark and rainy forest, then clears up near the end. The level will be unlocked when Once upon a Time is completed.

The level is one big area. At the beginning, Rayman and the team come across butterflies that upon contact will cause tree trunk-like structures to move. The first Skull Coin can be found by using a vine and performing a walljump on a hanging tree trunk. The first secret area is near the coin, as the wall run must be used to reach it. After that, the heroes will move on, battling Lividstones and touching more butterflies to advance. The second Skull Coin is located under a tree trunk that uses a platform to crush the team. The third Skull Coin is in between two platforms; the team must be quick to get it then climb back up. Later on, the gang of heroes reach the part of the forest where the weather clears up. More butterflies and Lividstones will appear in this part. The fourth Skull Coin is under a long tree trunk, where it can be reached by using two vines. The fifth Skull Coin is near the second secret area. The exit is nearby. 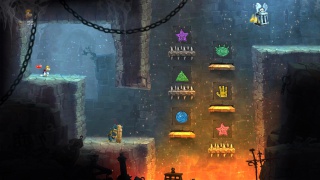 Like one of the secret rooms from the previous level, there are platforms with strange symbols above them. The team must remember which ones are safe to jump on in order to reach and break the flying queen Teensie cage.

In this secret area, Rayman and the heroes will face a bunch of Lividstones before reaching the king Teensie cage.

The gameplay of the level has, along with Infiltration Station - invaded, a unique gameplay in which the character(s) are stuck in a section of the level, and must clear the area from all the enemies incoming (enemies from Toad Story) in order to proceed to the next section. Most of the time, a giant stone block or a vine obstructs the player's way, who must clear the area from the enemies to remove those obstacles.

Meanwhile, Dark Rayman is trying to catch the player (or the player leading the group if played with more than one player) by imitating their movements. The player must kill all the enemies and avoid Dark Rayman at the same time.

The level is divided into three sections :