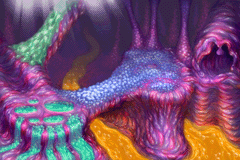 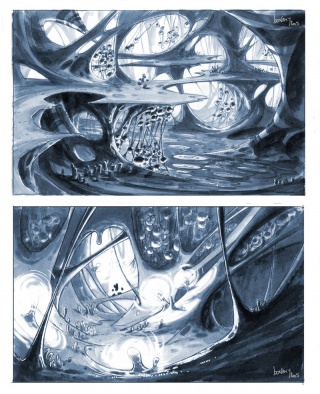 The Organic World, as it would have appeared in Rayman 4.

‘Organic Cave’ is the third of the five worlds in the Game Boy Advance adaptation of Rayman Raving Rabbids. Unlike most of the game's environments, it does not have a strong basis in the previous games of the series. It is derived from a level once planned for inclusion in Phoenix Studio's cancelled Rayman 4, where it was known as The Organic World or The Organic Cavern. 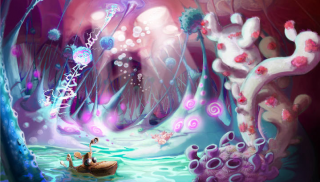 The Organic Cave is an enormous network of underground caverns and tunnels, comprised entirely of organic material. Living tissue lines the cavern walls and fleshy protrusions dangle from the cave roofs. Rayman must also overcome creatures of mucus, while organic platforms help him to cross seas of stomach acids, and sinewy doors constructed by the Rabbids impede his progress.

Rayman Origins includes a level, entitled My Heartburn's for You, which takes place within the stomach of El Stomacho, one of the Four Kings corrupted by the Bubble Dreamer's nightmares. The player characters must outrun walls of fiery heartburn and eventually take the dragon down from within. It is likely that this level was inspired by concept of the Organic Cave.