Rayman Raving Rabbids was originally developed as a 3D platform game, under the working title Rayman 4. It was announced by Ubisoft on the 11th of April, 2006, shortly after the cancellation of Phoenix Studio's unrelated Rayman 4 project. Under development by Ubisoft Montpellier, the game was to be a free-roaming action platforming game, in which the player would control Rayman as he battled against an invading army of Rabbids. The game was announced for the PlayStation 3, Xbox 360, Windows, and the Nintendo Wii, which was then codenamed the 'Revolution'.

The game's story was intended to be simplistic, clichéd and ludicrous, in a parody of the storytelling devices that are standard in platform games. The goal was not a complex storyline, but a suitable framework for developing the characters and the situations. Michel Ancel said of the game, 'It's a comedy, like Mars Attacks or some Monty Python movies. I'd like it to sound absurd and funny.'[1] 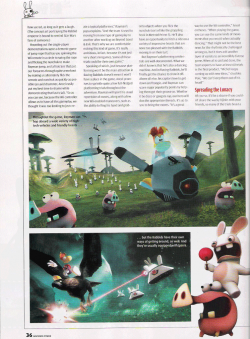 A scan with pictures of the game.

At the time of the original Rayman game, or perhaps earlier, the Glade of Dreams was inhabited by innocent and friendly rabbits. Because of their stupidity, the rabbits were shunned and bullied by the other creatures. Retreating underground, the rabbits grew bitter and hateful, ultimately becoming the insane and violent Rabbids. The game begins when, after decades or centuries of plotting and scheming, the Rabbids rise from the ground in huge numbers, armed with the gigantic war machines and flying crafts that they have constructed, and begin their vengeful takeover of the Glade.

The only one who can defeat the Rabbids and bring an end to their invasion is Rayman, the hero who has protected the Glade from evil many times before. Familiar characters from previous Rayman games appear, and find themselves in new situations, as the Rabbids intend to use them for 'strange purposes'.

During the game, Rayman meets and falls in love with a female member of his own species. In order to defeat the Rabbids, Rayman is forced to join forces with André, the villainous Black Lum who orchestrated the Hoodlum invasion in Rayman 3. Other characters from Rayman 3 also appear. An early teaser shows Teensies fleeing from the Rabbid army. The leader of the Rabbids seems to be the obese and decadent Jabbit the Rabbid. He kidnaps and imprisons the baby Globoxes, Rayman's girlfriend, André, and André's own girlfriend, and it is left to Rayman to rescue them all. 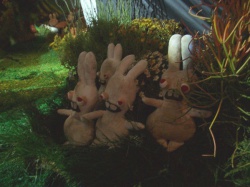 Plush of Rabbids at E3.

The game would have been a 3D platformer, similar to Rayman 2 and Rayman 3. A prominent feature was that it featured an open world, where the player could explore, roaming from one area to the next, as in Beyond Good & Evil. Rayman would have had to beat up the Rabbids in close-quarters combat, similarly to the slapping-based fighting in Rayman Origins; huge numbers of Rabbids could be on-screen at any given time.

Along the common Rabbids, a type of Rabbids called Zombie Rabbid[2] was planned to appear in the game. They possess a denser fur and constant red eyes. Some had a different fur color or others were bigger or smaller. According to the prototype images, the Zombies Rabbids were planned to be recurring enemies in the game. When the game became a Party-Game, the Zombies Rabbids were removed from the consoles versions but one of Zombie Rabbid appears as an enemy in the Game Boy Advance version of Rayman Raving Rabbids.

In order to complete certain tasks, Rayman would have to hypnotise the Rabbids by dancing, taking control of them and manipulating them to access new areas of the game. The player would have to select a musical track and make Rayman dance to the rhythm accurately. Rayman could wear several different costumes, each based on a different musical style. However, the dancing was intended to be no more than a minigame, and would not have taken a central role in the gameplay.

Another major feature was the ability for Rayman to tame and ride dark creatures, such as gigantic spiders, sharks, birds and warthogs. Each creature had their own abilities; spiders could climb walls and ceilings, sharks could swim, birds could fly, and so on. These creatures would help Rayman to defeat the Rabbids and their machines. 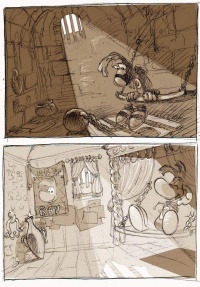 The evolution of Rayman's prison cell.

A small group of developers at Ubisoft Montpellier began work on Rayman 4 while Peter Jackson's King Kong was under development. At the time, the developers had no clear enemy in mind for the game. When the Nintendo Power magazine expressed an interest in covering the new Rayman game, Michel Ancel quickly sketched a concept for a new rabbit enemy while riding a train from Montpellier to Paris. The game was being developed for the PlayStation 2, until the developers received Wii development kits from Nintendo. With these tools, the developers began to experiment with a wide variety of gameplay styles; as a result, the game's action and platforming elements were ultimately removed and replaced with minigames.[3] The final game, Rayman Raving Rabbids, was almost unrecognisable compared to the original Rayman 4 concept.

Jabbit the Rabbid is an character who would have had a role in Rayman Raving Rabbids, had it been released as the platformer which it was originally conceived as. He appears to be a huge, slug-like Rabbid suffering from morbid obesity and he is probably a reference to Jabba the Hutt from Star Wars. He appears to enjoy watching Rayman beat the Rabbids, as shown in some concept art. Rayman's girlfriend is an unnamed character who would have had a role in Rayman Raving Rabbids. She appears to be a female member of Rayman's species, and is seen in several pieces of concept artwork as printed in a Nintendo Power article about the then-upcoming Rayman Raving Rabbids. According to Michel Ancel, "Rayman will have to save the world, his girlfriend and the girlfriend of his old enemy and his old enemy too!" Concept art shows that Rayman's girlfriend and the baby Globoxes have been captured by Jabbit. It was also confirmed that the 'old enemy' with whom Rayman would have to join forces was André, presumably meaning that Rayman must also rescue André's girlfriend.

Ubisoft's official 2006 press release on the game read as follows:

Rayman Raving Rabbids marks the return of Rayman, in his funniest and zaniest adventure ever. When his world is threatened by a devastating invasion of crazed, out-of-control bunnies, Rayman must rise up against these furry foes and foil their wicked plans. Using an array of amazing new abilities, and with the help of magical creatures, Rayman will need to break out all his best moves to save his world from these delirious bunnies and their hare-raising antics. “It’s a real pleasure for me to be back working on an all-new Rayman,” said Michel Ancel. “After wrapping up my last game, the team here in Montpellier sat down to talk about having some fun with Rayman and his universe. We are running into a bit of a problem, though, because our game has been invaded by thousands of raving mad and vicious bunnies, who have apparently been preparing this assault since the very first Rayman game. We are now sending an SOS to all motivated gamers to help us get rid of them as fast as possible!” Here are a list of features you'll find in the new game!

What follows is a collection of images released during the period when Rayman Raving Rabbids was still intended to be the fourth Rayman platformer, before it became a collection of minigames. Rayman can be seen riding several creatures and fighting very numerous, Zombies Rabbids who make use of advanced technology.

During the development of Rayman Origins, Michel Ancel confirmed in an interview that a new 3D Rayman platform game was planned. In another interview which took place in December 2011, Ancel reiterated this, and hinted that the new game may be based on the Rayman 4 prototype that was canceled in 2006.[4] It is not clear whether the game will still feature the Rabbids, despite the lengths the developers have gone to in order to separate the two series, or if the game will be reworked to feature different enemies. As of 2019, Michel Ancel is currently working on two other games, Wild and Beyond Good and Evil 2, making it unlikely that anything will come from this prototype anytime soon. However, on October 12, 2017, Ancel posted on his Instagram account that he is very interested in making the 'fourth' Rayman adventure,[5] suggesting of a future revival of the prototype or the then-planned original fourth game that was cancelled. In september of 2020, Ancel announced his retirement from the gaming industry,[6] making this revival from him unlikely to ever happen. He however added that he believed a different team would be able to make the game without his involvement, as happened with Rayman 3.[7]