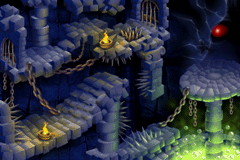 ‘Dark’ is the fifth and last world in the Game Boy Advance adaptation of Rayman Raving Rabbids. Unlike Child, Forest and Sweets, it is not based on any of the worlds of the first game. Like the Organic Caves (and partially the Child world), it is possibly derived from an environment which was initially planned for inclusion in Rayman 4.

The Dark world is a dungeon-like underground labyrinth in which the Rabbids make their base. At the beginning of the game, Rayman and his friends (including Globox and the Grand Minimus) are kidnapped by the Rabbids and locked up in the Dark world. With the help of Murfy, Rayman recovers his telescopic fist and defeats Pink's giant mechanical Antitoon, in what amounts to a prologue level. He then finds himself transported to the village, where Ly the Fairy explains the story to him. Thus the Dark world, despite being the game's final section, is visited before even the first proper level.

The final boss of the Dark world (and the game) is a colossal mechanical Rabbid which shoots heat-rays out of its eye; several of these War of the Worlds-inspired machines were seen in Rayman 4 pre-release videos and screenshots. It is unknown whether this is the 'Rabbids' Mothership' which is referred to in the game.

It seems likely that the Dark world would have appeared in Rayman 4 (perhaps as the final level), but this is unconfirmed.