Pink is mute and timid. Yet, with just a little patience you can easily learn the basics of his method of communication and understand what he says. For example, "Hey mate! What's up?" is translated, in his language, by firing a heat-seeking missile. (It is true that, long term, you could say that all he really knows how to say is "Hey mate! What's up?")
—Manual, Rayman Raving Rabbids 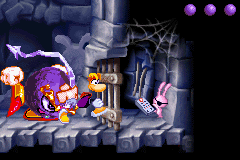 Pink is a minor Rabbid who makes an appearance in the Game Boy Advance version of Rayman Raving Rabbids. Pink is a tiny, pink Rabbid with an eyepatch on its left eye. In a manner not dissimilar to the Spyglass Pirate's control over Clark in the Tomb of the Ancients, Pink is seen remotely controlling a large, purple, Antitoon-like robot, which acts as the boss at the end of Rayman's first visit to the Dark world. Pink attacks with the Antitoon-like robot by making it repeatedly roll towards Rayman in an attempt to crush him. When the mecha charges at Rayman in an attempt to headbutt him, its head can be punched, damaging it. It takes three such hits to defeat.

Pink sitting in a four-legged robot 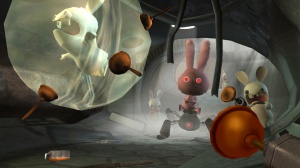 Pink has a more important role in the console version of Rayman Raving Rabbids, firing guided missiles at Rayman in certain Bunny Hunt games. Usually Pink is behind an impenetrable shield that cannot be hit by firing plungers or Rayman's telescopic fist at it, so Rayman must use either of his two attacks to shoot the missiles back at Pink, damaging it. After Pink is destroyed, the cage containing the baby Globox drops down and shatters. Pink is completely covered in metal, with red, glowing eyes, who is constantly dependent on its crawling machine (bigger versions of these machines also appear in Bunny Hunt games, shooting orange globules at Rayman). At the end of the game, it is shown dancing to "La Bamba" and "Girls Just Want To Have Fun", although it is shown without its machine.