From RayWiki, the Rayman wiki
(Redirected from Dungeons of Murk)
Jump to navigation Jump to search

The Dungeon of Murk is the fifth level in Rayman: Hoodlums' Revenge. During the entire level, the player controls Globox, who was imprisoned by the Hoodlums in the murky area. 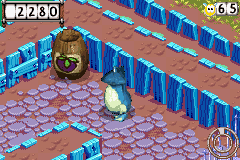 Globox can use the plum juice barrels to his advantage.

The start of the level shows Globox captured alone between two closed gates. As he talks to himself, he is originally scared because of being alone and then all of a sudden a confident side of him takes over who wants to escape. This is probably because of the remaining spirit of André making him starting to crave for plum juice, which gives him effects similar to alcohol intoxication. Globox starts by activating a nearby switch to open one of the gates, and tries to escape by finding other switches to open more gates. He will need to do so while avoiding Hoodmonger Soldiers while not under the influence of plum juice. Although if he is, the Hoodmonger Soldiers can be destroyed.