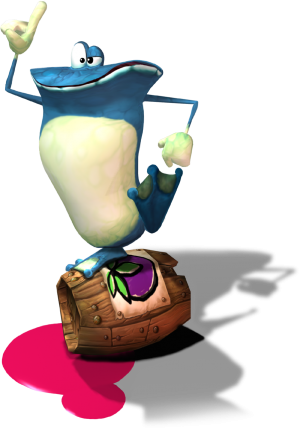 Globox with a barrel of plum juice.

A wicked brew that turns mild-mannered Globox into a whirlwind of destruction!
—Manual, Rayman: Hoodlums' Revenge

Plum juice is a fermented beverage made from the extraction of liquid from fresh plums. Its alcoholic proof and the hallucinogenic properties of plums make it the Hoodlums' favourite drink, and while André is inside Globox's stomach, whose behaviour is modified by this psychotropic substance, he forces him to drink every single barrel of it he finds on his way. Globox is also allergic to plum juice; of Globox's many reactions to drinking it, it is unclear which are caused by its alcoholic content, which are caused by its hallucinogenic properties, and which are caused by Globox's allergy. Plum juice is also used by Hoodbooms as an explosive liquid in small bottles; this method's effectiveness is most likely due to the alcohol's flammability. Grim Keepers usually have a jug of plum juice on hand to drink away shellshock after losing their Grims in combat.

In Rayman: Hoodlums' Revenge, barrels of plum juice reappear when Globox is the playable character. He will come across Hoodlum enemies like Hoodmongers and Hoodmonger Soldiers and runs away if he gets too close. At times a plum juice barrel is nearby, which Globox can drink it to gain abnormal confidence and be able to defeat the Hoodlums that stand in his way, for only a limited time.

It is also suggested in the manual for Rayman Origins that plum juice is what gives Globox his blue colouration:- "...the Teensies favour an epic tale of high-comedy, featuring Globox's fondness for sacred plum juice."