Eat at Joe's (French: Mangez chez Joe – Eat at Joe's) is the second level of the Caves of Skops, the fifth world of the original Rayman game. It consists of six parts, though the first one is only an introductory sequence.

This part is an introductory sequence, in which Rayman meets Joe the Extra-Terrestrial, owner of a small diner which electric power was cut-off. Joe gives Rayman a firefly to help him in the dark cave in the next part. 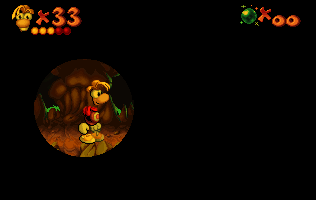 Joe's firefly will prove useful in the dark caves

There are a lot of traps in this part. Rayman needs to react to them throughout. This part corresponds as the higher section to the fifth part. 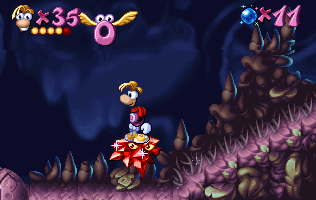 A spiky platform with a pair of eyes 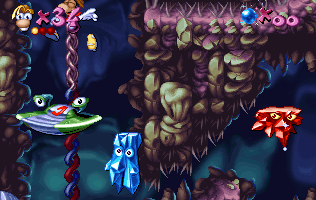 In this part, Rayman has to punch the plug that turns on the diner lights, as well as a network of flying saucers, held with wires which make up Joe's electricity system. They will allow him to get back to Joe's place. This is the only part along with Bongo Hills in Part 6 and Moskito's Nest in Part 4 to not have any cages and not involve a boss. 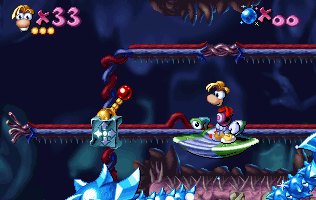 Punching this lever changes the direction of the flying saucer

This part corresponds to the lower section of the third part, where Rayman goes through in order to get back to Joe's diner. 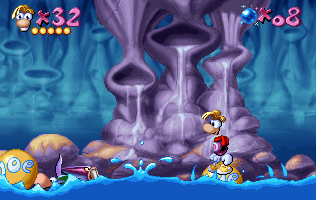 Several species of fish live in the caves

Rayman now comes back out to Joe's diner, and there he has to cross the water by jumping on buoys that are scattered over the place, avoiding spiky balls and dangerous large-mouthed fish.