Joe the Extra-Terrestrial gives Rayman this power to help him light up the dark regions of the Caves of Skops.

The Firefly follows Rayman's punching fist, so throw his fist out in front of him to light the route ahead. 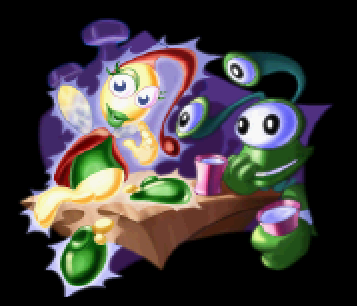 Joe offers Rayman a firefly to light up the dark.

As Rayman makes his way through the Caves of Skops, the fifth of the game's six worlds, he comes to Eat at Joe's, the snackshop owned by Joe the Extra-Terrestrial. Joe has become depressed because the neon lights above his snackshop have gone out. In order to turn them back on, Rayman must travel deep into the caverns and reactivate Joe's electrical system (including his flying saucers) by reinserting a plug which has become disconnected from its socket. To get there, Rayman must pass through a pitch-dark cave; in order to help Rayman find his way through the darkness, Joe gives him the firefly.

Held in Rayman's fist, she creates a circle of steady light around. When he throws his fist, the firefly's circle of light travels with it, temporarily illuminating the path ahead. Once the dark stage is completed, the firefly disappears and is not seen again; however, if the player chooses to replay the Eat at Joe's level, Rayman's fist lights up, indicating that she stays in the area.

Like a few other minor characters who provide powers in the original Rayman, the firefly is absent from the Atari Jaguar version of the game, meaning Joe simply sends Rayman off into the caves after showing him the neon lights. The following level has the same layout as other versions, although it is fully lit without the firefly's assistance.

The firefly makes a cameo appearance in the Rayman Activity Centre minigame the Funny Photographer. When players complete the jigsaw puzzle featuring her, she sings a song about shining prettily.

Fireflies appear in these games as scenery. They can seen in levels from the Jibberish Jungle and Ticklish Temples in Rayman Origins. In Rayman Legends, they appear in Teensies in Trouble, and Toad Story.