Rayman Classic is a mobile port of the Pocket PC version of the original Rayman game with much of the soundtrack from the PlayStation version. It was released for Apple iOS on the App Store on February 18, 2016 and for Android on Google Play on March 17, 2016. Unlike earlier ports of the PC version, such as the Game Boy Advance and Nintendo DSi versions, this one doesn't leave out any content. The Breakout minigame is present, as well as the short animations shown after each boss-fight. Due to the touch screen oriented nature of mobile devices, the game uses virtual buttons and a virtual analog stick. While the iOS version has support for physical gamepads, the Android version currently lacks this feature even though it is advertised in the store description.

As of November 24, 2016, the app is free with ads. The ads can be disabled through an in-app purchase, though this is done automatically if the player bought the game prior to it becoming free.

During the summer of 2018 the app was removed from the App Store in most regions for unknown reasons.

Differences from other versions

While this is the most complete port of the PC version, it does have some issues present. Repeating sound effects, such as Rayman charging his fist, the helicopter and plums moving in water, stop repeating after a few seconds. This is the first version of the original Rayman game to include achievements, not including the Anti Dark-Matters from the DSi version, through Gamecenter and Google Play Games. Some are however glitched and therefore impossible to obtain. Some can still be obtained if replaying the game and redoing what is required for the achievement. Other issues involve incorrect music playing during the Magician's bonus stages, no music playing during the encounter against Mr Dark in Mr Dark's Dare and the characters Rayman meet, such as Joe and Tarayzan, not speaking like in the PC version. There's also a huge glitch with the Breakout minigame making it near impossible to beat. Whenever the ball is lost, the player can't move Rayman. This means that if Rayman is positioned under an obstacle, launching the ball will make it bounce back right down. On iOS devices this can be resolved by playing with a controller, which makes movement possible before launching the ball.

While there are a bunch of glitches, the game has also fixed a few issues preset in the original game. The music, which was known to be lacking in the PC version, is now mainly taken from the PlayStation version. The intro plays in full-screen and its English voice-acting is taken from the PlayStation version. The game now includes an auto-save feature which auto-save each time the player enters the map. Due to this the save points have been removed from the map. The Breakout minigame can now also be found on the map instead once Mr Dark's Dare is completed. 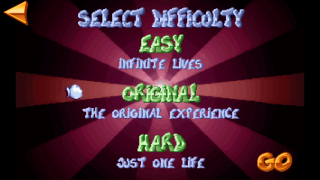 Whenever the player starts a new game, there are three save slots to choose from, each with their own name which can't be changed. These names are RAY, BET and JOE. The names are references to the characters Rayman, Betilla and Joe. The player will then get to choose the difficulty, which is a one time decision and can't be changed without starting a new game. The difficulties available are easy, original and hard. Easy mode grants the player unlimited lives with it staying at 99, original mode plays exactly like how it originally did on PC and hard mode has the player start with 0 lives and continues. More lives can however be obtained normally in hard mode. The virtual jump and punch buttons use the same textures as the ones from Rayman Jungle Run and Rayman Fiesta Run.

The game was originally teased on February 11, 2016 with the official Rayman Facebook page posting that a special 'retroRayman' is coming to mobile the following week with an image saying Back to Basics with the date of February 18, 2016 below.

On February 17, a new post revealed the name Rayman Classic as well as it being launched on iOS before Android.

Prior to being changed to a free title, the game received numerous sales to promote the game. 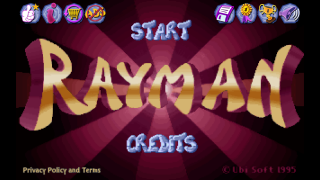 This is the first version of the original Rayman game to feature achievements and leaderboards. On iOS devices they are connected through Gamecenter and on Android through Google Play Games.

There are currently 51 achievements which are earned by completing various tasks, such as defeating a certain number of enemies. Some of the achievements have been known to not trigger correctly on both iOS and Android devices.

There are a total of 20 leaderboards in the game, with 18 of them being the completion time in levels. Although the leaderboards function during the first playthrough, they do not always register the new time when replaying a level. This is most likely to happen on levels where the final phase can't be replayed, such as Moskito's Nest. The two other leaderboards are for the total completion time and the total amount of Tings collected.