Mr Skops' Stalactites (French: Les Stalactites de Skops – The Stalactites of Skops) is the third and final level in the Caves of Skops, the fifth world of the original Rayman game. It consists of three parts the first time it is played, and only one during subsequent playthroughs, as the last two parts feature Skops the Scorpion.

It is one of the only levels in which all six cages can be found, along with Mr Sax's Hullaballoo and Twilight Gulch. 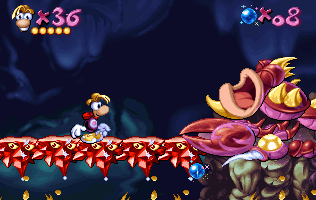 Rayman finds himself in front of the sleeping Mr Skops who, angry at being woken, attacks him. 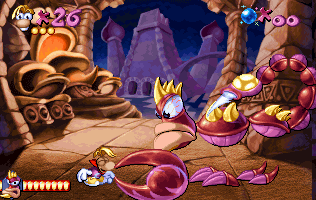 The big boss of the Caves of Skops, Mr Skops

Rayman has to battle Mr Skops. Like the previous boss battles, once this level is completed, this part cannot be replayed.

Like in Mr Sax's Hullaballoo, it is possible in the PC version to break all 6 cages in the first phase and leave through the start-of-level exit sign without having to face the boss. This is not possible in the PlayStation version as the exit sign in question is not present. Even if Mr Skops was not defeated, Mr Dark's Dare will still unlock once all cages have been broken.