Electric Final (known as Electric Tunnel in Rayman Rush) is the third and final race course in the Extreme League of Rayman M. This course is unlocked along with the other Extreme courses upon completion of all of the Expert League courses, and completing this one unlocks the Bonus League.

The race starts out with a series of boost pads, followed by an ascent up a large factory wall using a bounce pad. From there, the players must avoid giant hammers that crush anything underneath them. After the player has navigated their way across the smashing arms, more bounce pads give the first decision: To slide along the lower path, filled with electric barriers, or take the upper route which is much thinner but has some Purple Lums to swing from (one of which goes directly into an electric gate which causes the player to drop down onto the lower path). In the lower path, the slide ends and the players must make their way up a piece of netting whilst avoiding the barrels that rain down from above. On the top path, meanwhile, another fork comes into play: Staying on the left side of the fork will lead to a ramp filled with platforms that move in and out while the right path leads to a boost pad that needs buttons to be pressed to keep the platforms out. Eventually, all three paths end up together. The players must go along a small passageway where kegs are being rolled at them. Afterwards a quick run comes into play before they must climb through some sticky tar and then go past the finish line.

Along with the other race courses of the Extreme League, Electric Final is not based on any particular levels from Rayman 2. In fact, it bears more resemblance to the Pirate Factory from Rayman Revolution.

At one point in Electric Final, a number of the robotic Gorilla Pirate enemies from Rayman 2 can be seen being manufactured on a production line. 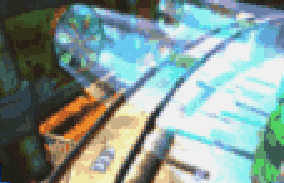 Electric Tunnel in the menu of Rayman Rush.