Rayman poisoning your life? I've got the antidote... Equipped with the latest power booster, nothing can stop it. You can control it yourself, or put it in self-pilot. It can kill, crush, destroy, torture, pull ears... Its legs are programmed to squash fleeing victims... In short, it does everything, except the dishes... Don't forget the name of this marvel: the Grolgoth!
—the General to Admiral Razorbeard, Rayman 2

The Grolgoth is a giant robot which Admiral Razorbeard uses in an attempt to put a stop to Rayman at the Crow's Nest. Piloted by Razorbeard, it is the final boss of Rayman 2 and the Game Boy Advance/N-GAGE version of Rayman 3.

A diagram of the Grolgoth can be found on a table in the Pirate Factory, an area exclusive to Rayman Revolution. This paradoxically seems to suggest that the Robo-Pirates created the Grolgoth, or had some awareness of it prior to the cutscene in which Admiral Razorbeard purchases it from the General. 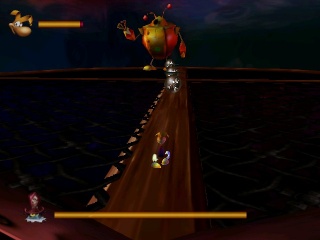 Razorbeard places the Grolgoth at the top of the mast on the Buccaneer. He also places Globox, dangling over the edge of the ship from a large elevator's antenna. Before Razorbeard shoots Globox to his doom, Rayman appears through the elevator, shouting that Razorbeard shall leave Globox alone. Razorbeard takes advantage of Rayman's position and shoots down the elevator. As Razorbeard believes himself victorious, Rayman pulls himself back up on the platform. After checking to ensure that Globox is safe, the fight begins.

The Grolgoth is immune to Rayman's magic fist, and starts with heavy attacks such as shooting helicopter bombs, fast energy balls and trying to jump on Rayman to squash him. Rayman will have to shoot the helicopter bombs back at the Grolgoth, but straight on, otherwise the Grolgoth will evade them.

Rayman is saved by Ly the Fairy, who sends a Silver Lum-like ball of energy to catch Rayman in mid-air, and lower him safely to a small pipe sticking out of the lava, on which a friendly flying shell has been stationed. Ly's face appears in Rayman's mind, and she informs him that Polokus has eliminated all of the Robo-Pirates on the land and that the slaves have escaped (with the help of Rayman, seen in the Dreamcast, PlayStation, and PlayStation 2 versions of the game). Rayman sees that Razorbeard has survived the fall as well, with the Grolgoth clinging between two metal pipes going up the chamber's walls.

Rayman flies on the flying shell, both having to find ammo hidden inside the chamber and avoid the homing energy-balls that Razorbeard shoots after him. Rayman must use the ammo to shoot energy-balls at the Grolgoth's hands, causing it to slip and fall into the lava. When the Grolgoth is struggling to get out of the lava, it loses some health; Rayman can damage it more by shooting at it while it is still in the lava. Should Rayman get hit just once during this phase of the battle, his flying shell will explode and the battle begins as new from the beginning of this phase. When Razorbeard reaches 20% health, he will climb up to the top of the chamber and temporarily raise the level of lava. This can happen several times. When Razorbeard's health reaches 0%, the Grolgoth stalls and falls into the lava. Razorbeard crawls out, dragging an escape pod with him. Before abandoning the Buccaneer, he says: "I've saved one last little surprise for you", and presses a button on a remote-control device, triggering the Grolgoth's self-destruct mechanism. Razorbeard in his escape pod flies straight up the mast of the ship, through the Crow's Nest and to safety. The Grolgoth detonates, blowing the Buccaneer to pieces and apparently killing Rayman. Razorbeard continues flying upwards until he reaches space.

In the PlayStation version of Rayman 2, the second phase is entirely different from the other versions. After the cutscene where Rayman and Razorbeard fall down into the Buccaneer and Rayman is saved by Ly the Fairy, Rayman will have to fly the flying shell through a long horizontal pipe, with controls limited to 2D movement. The Grolgoth will be flying backwards, facing Rayman. Rayman can shoot normally from the flying shell, but his shots are almost ineffective. Razorbeard will shoot slow-moving energy-balls that Rayman must avoid, and shoot helicopter bombs which can be fired back at him. Should Rayman get hit, he will not die, but lose health as normal. Every time Razorbeard has fired six helicopter bombs, he will cast a number of spiked mines, which fill increasing amounts of the screen as the battle wears on. Rayman must find a spot to pass in between the mines without getting hit. After the Grolgoth has reached 30% health, it begins to shoot powerful homing missiles, which fly towards Rayman. Rayman must dodge them, after which they will circle around and appear behind him, still homing; Rayman can then position himself (and the homing missile) towards Razorbeard, so that the homing missile will hit the Grolgoth. Razorbeard can dodge the missiles if they are not aimed correctly. When Razorbeard's health reaches 0, the final cutscene begins as normal.

The Grolgoth reappears in the Game Boy Advance version of Rayman 3, where it is once again used by the Admiral Razorbeard to battle Rayman. Presumably this Grolgoth is a different unit to the one which was destroyed at the end of Rayman 2. It appears only in Heart of the Ancients, the final level of the game (excluding bonus levels). As in Rayman 2, this Grolgoth's battle consists of two separate phases. In the first phase, the Grolgoth is fought in a manner not dissimilar from those of the bosses in the original Rayman game; Rayman must avoid the Grolgoth's alternating high and low energy blasts while punching its metal helicopter bombs back at it in order to damage it. After being damaged 5 times the Grolgoth laughs at Rayman and passes over to the second phase. In that second phase, Rayman and the Grolgoth continue their battle in a spacious underground dungeon. Rayman rides a flying shell, and must manoeuvre it to trick the Grolgoth's homing missiles into striking the Grolgoth itself; this is also how Rayman defeats the Grolgoth in the PlayStation version of Rayman 2. Once defeated, this Grolgoth collapses to the ground, destroyed. Razorbeard is not seen again.