Filled with gunpowder, they explode at the smallest shock. The more advanced models can even fly...
—Manual, Rayman 2 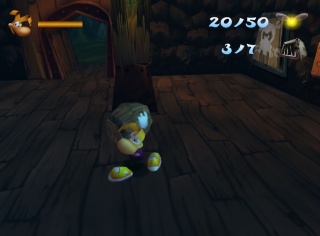 Rayman carrying a keg, with a keg dispenser in the background.

A keg or powder keg is an explosive barrel of gunpowder found in some Robo-Pirate strongholds in Rayman 2 and most of the handheld games that followed. When Rayman is made to approach a stationary keg, he automatically picks it up; he can then walk about with it. Pressing the ‘jump’ button causes Rayman to toss the keg directly upwards – he can catch it again if he stands still. Pressing the shoot button causes Rayman to throw the keg forwards. By throwing kegs in these ways, Rayman can break open doors that are sealed with metal sparadraps, destroy enemies, or break open cages that are right above Rayman but out of his reach. If Rayman approaches a flaming torch while carrying a keg, the end of the keg ignites, forcefully sending the keg – and Rayman – hurtling through the air.

Kegs are dispensed by trap-doors in walls, which bear the Robo-Pirate insignia. A new keg is automatically dispensed by one of these hatches each time the keg currently in use is destroyed. When Rayman has taken care of the sparadrap or other obstacle, no more kegs will be dispensed. Kegs can occasionally be found rolling down hills or across walkways in places such as the Bayou or the Sanctuary of Rock and Lava; in these cases the kegs cannot be used and serve only as obstacles for Rayman. If Rayman jumps on top of a moving keg, he is bounced high into the air, allowing him to reach Lums or high platforms.

Kegs act as obstacles in the race courses of Rayman M and Rayman Rush. Some courses feature kegs which are composed of metal rather than wood.