A red model of the Henchman 800 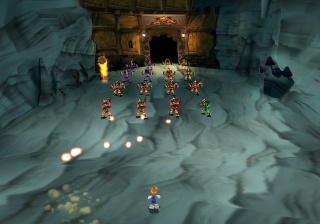 A battalion of Henchmen 800

These are the pirate leader's robot invasion force. Totally devoted to Admiral Razorbeard, they enforce a reign of terror by capturing anyone unlucky enough to cross their paths. There are several different models of henchmen, each with its strong and weak points. It's up to you to figure them out...
—Manual, Rayman 2: The Great Escape

Henchmen 800 are a type of Robo-Pirate that comprises the majority of the army commanded by Admiral Razorbeard. They appear primarily in Rayman 2 and in its remakes, but can also be found in the Game Boy Advance and mobile phone versions of Rayman 3. 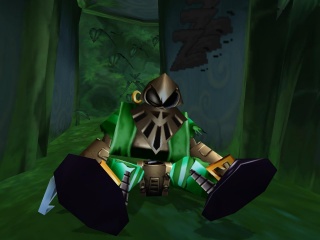 Henchmen 800 often are found sleeping on the job

Henchman 800 all share a like appearance, their abilities and resilience varies by their colouration. The only exception is the Zombie variation, which features a similar appearance, but is rustic and run-down, befitting its name. The ranks of Henchmen 800 are determined by colour, though they overlap in the original and Dreamcast versions of Rayman 2. Notably, some of them are exclusive to the PlayStation and PlayStation 2 versions. The Game Boy Advance and mobile phone versions of Rayman 3 also introduce their own further variations, with further modifications to their weapon capabilities.

Most varieties of Henchman will attack from a distance, firing some form of projectile, the typing of which varies by model. Should Rayman stray too close to them, they will swing their hooks at him. Some Henchman models may opt to chase after Rayman, and will only fire at him momentarily after they take damage. Other Henchman may attempt to flank Rayman by using drills to move underground, or merely jumping around after a barrage of fire, to land in another area to continue firing. Should a drilling Robo-Pirate reemerge where Rayman is standing, he will lose all his health, giving a Game Over. Finally, Robo-Pirates can also ambush Rayman by dropping into the area via parachute, only one parachuting pirate is seen in the original version of Rayman 2, in the Tomb of the Ancients. However, more appear in the Revolution remake.

Robo-Pirates serve mostly as foot soldiers, as such, not much is known about their personalities. They appear to be capable at humour, as seen in the cutscene where one trips up the Spyglass Pirate. Some also can appear to be lazy, as shown by various encounters with them sleeping on the job. Their individual intelligence is also unknown, though one is fooled by Rayman at the end of the Canopy, where he slips by one by hiding in a bush. 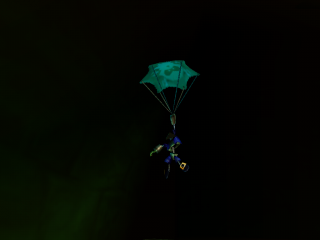 A purple parachuting pirate in the Tomb of the Ancients 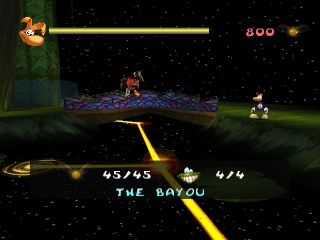 They are found in the PlayStation and PlayStation 2 versions of the game. While they are the second to highest rank of Henchman 800 in the former, they are the lowest rank in Rayman Revolution.

They are found in the PlayStation version of the game, in which they are the highest rank of Henchman 800.

They appear in the PlayStation 2 version of the game, in which they are the second to highest rank of Henchman 800.

They appear in the PlayStation 2 version of the game, in which they appear as severely damaged Henchmen 800.

They appear in the handheld adaptation of the third game and can jump over Rayman's shots.

They appear in the handheld adaptation of the third game where they hold a mace and can throw it at Rayman. They also are the only type of Robo-Pirates that appear in the mobile version of Rayman 3, in which they appear as limbless, red-eyed Henchmen 800 with a different type of hook firing regular energy projectiles.

A robot pirate's life is simple: be best, waste others, beat them to a pulp if necessary, have no mercy...
—Manual, Rayman M 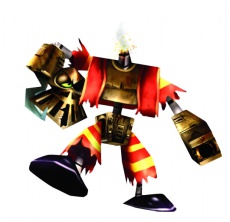 Official artwork of the Henchman 800 of Rayman M.

A particular Henchman 800 is one of the five playable characters that are initially available in Rayman M. He looks like the other Red Henchmen, apart from the fact that he has a built-in jet pack, which he uses to glide.

This game also introduces a most perfected version of the Henchman 800: The Henchman 1000. He can be unlocked as a playable character.

The manual for the GameCube and Xbox versions of Rayman Arena, the American localisation of Rayman M, offers the following description of the Henchmen 800:

Address: At the local bar in the port, amidst the singing and smoke.

Rayman gets killed by the drilling Henchman