This strategy guide contains hints and strategies for the levels of Rayman 2. It also details where most of the hidden collectibles are located, while also giving some information on the characters, enemies and objects of the game.

The presentation of the levels follows the progression in the original version. Most of the screenshots come from the Nintendo 64 version.

Oddly enough, the guide refers to the Sanctuary of Stone and Fire as the Sanctuary of Lava and Fire, the Sanctuary of Rock and Lava as the Sanctuary of Rock and Stone and the Technical Check-up as the Emission Control station. Through hacking in early demos of the game it has been revealed that these were originally meant to be the names for those levels. The guide also considers the Crow's Nest as a part of the Prison Ship, probably due to the Nintendo 64 version taking the player directly to the Crow's Nest once the Prison Ship is completed. Finally, the solution doesn't speak about the bonus level of the PlayStation version, or the secret passage of the 1000th Yellow Lum in the Tomb of the Ancients. 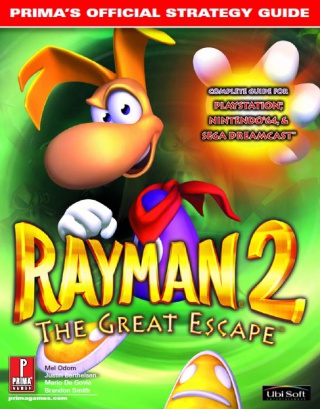 Cover of the second edition of the guide.
Retrieved from "https://raymanpc.com/wiki/script-en/index.php?title=Rayman_2:_The_Great_Escape:_Prima%27s_Official_Strategy_Guide&oldid=74504"
Category: