Rayman 2 underwent a bunch of changes during its development, most which have been found through hacking and from old trailers. 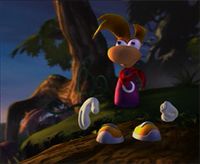 Before proper development of the 3D game began, a CGI short film using the concepts from the 2D game was created by the name of Rayman's Training. The short film stars Rayman battling a living punching bag, along with characters like the Hunter making an appearance. It premiered in February 1st, 1998 to the tradeshow/film festival Imagina 1998. After that, it has never been seen in its entirety since.

In various Rayman adverts from 1997 to 1998, there were several instances of "stock footage" of a CGI Rayman, and the most complete instance of this would be the E3 1998 trailer to Rayman 2. For two decades, no one had known where this footage had come from exactly; it was assumed that they were made for the trailer.

In early 2021, it was put together by a number of Twitter users that the pre-rendered scenes in the E3 1998 trailer were actually from Rayman's Training. This came at a worrying revelation, however; the short has no copies known to be online, and is assumed to be lost media.

Judging by the content of the PC version, the cutscene in the Prison Ship where Rayman frees the prisoners, which first appeared in the Dreamcast version, was originally meant to appear in the PC and Nintendo 64 versions.

In 2018 it was discovered that the PlayStation version contains a reference to a level by the name the Walk of Bravery, which was meant to appear between the Echoing Caves and the Precipice.

The PC version also has leftovers from several unused levels, being the following:

There was also originally meant to be a connection between the Fairy Glade and the Echoing Caves in the Hall of Doors [1].

Below is a list of all of the currently known early names for levels, locations and characters.

The cheat code "GETELIX" is mentioned along with the other known cheat codes in the PC version, but it appears to be unused. It was most likely meant to give the player the Elixir of Life before entering the Cave of Bad Dreams.

Many textures which were later used in the PlayStation version can also be found in the files for the PC version suggestion they were originally meant to be included there as well. These include the textures for Antitoons and the stone with Ly's face. Textures from the Dreamcast version were found as well, such as the textures for Eig. Some leftovers, such as controller icons, where found from the Nintendo 64 version.

Ssssam was originally meant to be metallic.

There were two different demos made for Rayman 2, both of them including two parts from the Fairy Glade. The pause menu in the demo.

Although the demos are very similar and include the same levels, there are some minor differences.

Early versions of the game dialogue has been found in the PC version's two demos. Some unused dialogue also exists in the final game.

A bunch of screenshots and artwork have been found from early versions of Rayman 2.