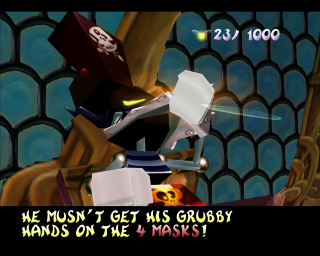 In Rayman 2, the 1000th Yellow Lum first appears in the cutscene which plays when Rayman enters the Bayou for the first time. Admiral Razorbeard is shown sitting in his cabin on board the Buccaneer, when the Spyglass Pirate arrives to inform him that Rayman has reached the swamps. Razorbeard goes into a fit of rage and orders that a Warship be despatched to destroy Rayman before he finds the Four Masks of Polokus. He then picks up a Yellow Lum and eats it. The Lums counter on Rayman's heads-up display, which had previously read ‘xxx/1000’, changes permanently to ‘xxx/999’. However, the 1000th Yellow Lum can be found at a later point in the game. He does not have to collect the other 999 Yellow Lums first, but most players presumably would, as the 1000th one is hidden in a more obscure location than any other. Collecting it does not restore the Lums counter on the heads-up display to ‘xxx/1000’, which may be a programming oversight. Near the end of the first phase of the Tomb of the Ancients, Rayman can find a secret passageway by jumping off a high ledge and helicoptering into a hidden recess in a wall. He then finds himself in a passageway leading to a secret chamber. There is a large pool of swamp water from one side of the chamber to the other; on the far side is an enormous skull with the 1000th Yellow Lum in its right eyesocket. It is not known how it came to be there after Admiral Razorbeard swallowed it. To get the 1000th Yellow Lum, Rayman must fight six Henchmen 800, two at a time. The first two appear in the giant skull's eyesockets as soon as Rayman enters the chamber; once he defeats them with his magic fist, a platform rises out of the swamp water. When Rayman steps onto the platform, two more Henchmen 800 appear in the same positions as the last two. When they are defeated, another platform rises, and when Rayman steps on it, another two Henchmen 800 appear for him to fight. He can then jump forward onto a horizontal spider web directly in front of the skull. Two small spiders are crawling on the skull; they can hurt Rayman and even knock him into the deadly swamp water if he is not careful. The spider web can bounce Rayman high enough to climb into the eyesocket and collect the 1000th Yellow Lum. Unlike other Yellow Lums, Rayman shouts ‘Yahoo!’ when he collects it, emphasising its significance. Inside and behind the skull is a slide into a pit of darkness; after Rayman falls down, he lands at the beginning of the second phase of the level, just as he would have if he had completed the first phase through by going through the normal ending point. The 1000th Yellow Lum is not counted as one of the Tomb of the Ancients's fifty Yellow Lums in this version; the level has an actual total of fifty-one Yellow Lums.

In Rayman 2, the 1000th Yellow Lum is found in a secret chamber in the Tomb of the Ancients.

In the PlayStation version of Rayman 2, the 1000th Yellow Lum does not appear. Instead of eating a Yellow Lum, Admiral Razorbeard eats a Red Lum. Normal Robo-Pirates eat Red Lums, according to the Knowledge of the World (and evidenced by the fact that Red Lums can be found when they are destroyed). In the other versions of the game, Razorbeard is shown to be the only Robo-Pirate who eats Lums of any variety other than Red. This may be because Yellow Lums are much rarer and more valuable than Red Lums. In this version of the game, only 800 Yellow Lums are said to exist. This change was presumably made due to the limitations of the PlayStation's hardware.

In Rayman Revolution, the 1000th Yellow Lum is found in a chest at the end of the Tomb of the Ancients.

In the PlayStation 2 version

In Rayman Revolution, the PlayStation 2 version of Rayman 2, Admiral Razorbeard eats the 1000th Yellow Lum as in the other versions, and it is still found in the Tomb of the Ancients; however, the circumstances under which it is found are very different. At the end of the level, once Rayman has defeated his friend, Clark the Giant (who was under the control of the Spyglass Pirate), Clark thanks him and tells him that he should check out the back room of the Technical Check-Up, where the Robo-Pirates store their inventions. Rayman walks over to the back room, where he finds a wooden treasure chest. Upon opening it, he finds the Lums Radar, a magnet-like device which can track down nearby Yellow Lums. The 1000th Yellow Lum is found in the same chest as the Lums Radar. As was the case in the other versions, Rayman shouts ‘Yahoo!’ when he finds it, and the Lums counter on the heads-up display is restored to ‘xxx/1000’. It is counted as one of the level's total of fifty Yellow Lums in this version. The secret passageway which contained the 1000th Yellow Lum in the other versions of the game is still present, as are the Henchmen 800 guarding it; however, the Lum itself is not found there, which indicates that it is indeed the same one.

In the 3DS version

In Rayman 3D, the Nintendo 3DS version of Rayman 2, the 1000th Yellow Lum is extremely difficult to acquire due to several glitches. The hidden area in the Tomb of the Ancients is still intact, but the spider web which should allow Rayman to reach the Yellow Lum does not act as a trampoline. The only known way to reach the Lum is for the player to manoeuvre Rayman so that he is hurt midair by Robo-Pirate projectiles or the small spiders which inhabit the giant skull – if done correctly, this can knock Rayman up to the area where the Lum resides. Sliding into the pit which is meant to take Rayman to the next stage instead causes the game to soft-lock; however, the Lum will still be saved if the level is exited from the pause screen, and thus 100% completion of the game is still technically possible. The cause of the glitches which surround the 1000th Yellow Lum in this version is unknown. 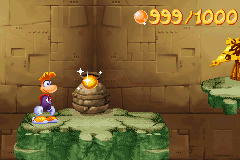 In the Game Boy Advance version of Rayman 3, the 1000th Yellow Lum is found in Lum Challenge, a special final bonus level.

In the Game Boy Advance version of Rayman 3, Admiral Razorbeard never eats the 1000th Yellow Lum (there is some indication that he wants to eat a Black Lum to gain its power, but this is unclear). As such, the Yellow Lums counter on the heads-up display reads ‘xxx/1000’ throughout the entire game. Once Rayman has broken all fifty cages and collected the other 999 Yellow Lums, a final bonus level, entitled Lum Challenge, is unlocked in the Pirate Stronghold, the last of the game's four worlds. Upon entering it through its magic curtain, Rayman finds himself in a very difficult, platforming-oriented level, at the end of which is a single Yellow Lum. Victorious music plays when Rayman collects it. It is not clear if this 1000th Yellow Lum is the same one that was eaten by Razorbeard and then found in the Tomb of the Ancients in Rayman 2 and Revolution.