Up And Down is the second level of the Ticklish Temples, a world in Rayman Origins. During the level, the heroes must use the Jibberish Jungle elements like the nenuphars to progress. This is the second level from this world and twentieth overall that's not included in the Back to Origins mode in Rayman Legends.

Through the beginning, the team needs to use the nenuphars to get by a large gap, including collapsing platforms. Some nenuphars have to be activated by hitting green bulbs. The first Skull Coin can be retrieved by quickly reaching it before it sinks down with part of a collapsing platform. After a while, the team will drop down to a lower level. The second Skull Coin can be acquired by body slamming on a flower bumper and using the moving nenuphars to avoid the Darktoons. The exit is close by at the lower level. 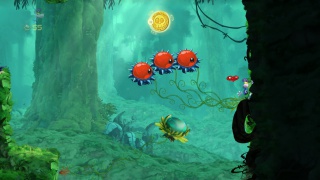 The players will continue to use nenuphars to progress forward. The third Skull Coin can be collected by performing a walljump to a flower bumper then another walljump to the coin, lying above spiky flowers. The exit is very close to the coin.

If the team body slams on the first flower bumper, they will get shot up near the first secret area. Once done, the heroes can go back down and perform walljumps along with the assistance of a caterpillar. The players need to time their jumps to get past the platforms that move up and down. Tentacle claw infested water must be avoided when jumping from nenuphar to nenuphar. Above a bigger body of water and a horizontal moving nenuphar, if the players perform walljumps, they will eventually get the fourth Skull Coin. The exit is to the right of a couple of flower springs. 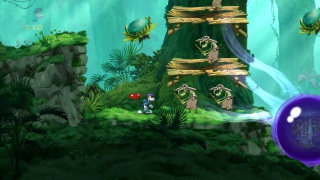 All the team has to do is destroy the Lividstones. When all are defeated, the Electoon cage can be broken open.

After a while of defeating Lividstones, the players can collect the fifth Skull Coin of the level if they body slam on a flower bumper and perform a walljump while gliding to the coin. Then, the team can use a champibumper to jump to the background, and progress from there. The team will once again jump on another champibumper to come back to the foreground where the exit is.

Near the starting point, if the players reach the Swingman, and jump to the left, they wo;; get to the second secret area. Once done, the players can use more swingmen to get across to the exit.

In this secret area, the heroes must jump onto mosquitoes to reach the cage. After avoiding bullets for a while, the team needs to shoot projectiles at two Lividstones and a hunter. Once the three enemies are destroyed, the heroes can get off their mosquitoes and break open the cage. 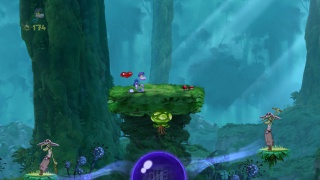 The team needs to defeat the two Lividstones. When finished, the Electoon cage can be broken to end the level. The team will pose on the photoboard as the Magician waits for the amount of Lums that were collected.