Antitoons, also known as Darktoons, are small minion enemies who are encountered frequently throughout the Rayman series. Their appearances are similar to those of the Electoons, except that Antitoons are larger, dark blue in colour and with light blue (or white) ponytails. The Antitoons make their most notable appearances in the original Rayman and Rayman Origins. In Origins, it is revealed that they are the offspring of Jano, Polokus's First Bad Dream.

In the original Rayman game, Antitoons are small bodies of dark energy which began to proliferate after Mr Dark stole the Great Protoon. They are extremely common, appearing in each of the game's six worlds (a distinction they share with the hunters). There are several types of Antitoons, each with a different behaviour. All of them are weak enemies which need only one hit from Rayman's telescopic fist to be defeated. Walking Antitoons are the most common of type. They freely wander on their platform, turning backwards when they face an obstacle. Rayman must simply avoid contact with them. Their small size makes them harder to hit, and Rayman often has to duck after punching so that his fist hits them on its way back to him.

Jumping Antitoons are static enemies who jump and try to bite Rayman when he passes above them. They are often placed so that they can take advantage of their position.

Charging Antitoons are static enemies who resemble their jumping counterparts, as they jump when Rayman is in sight, hover in the air for a moment with their mouths gaping, then through the air towards Rayman at a high speed. They can be punched or ducked under.

Flying Antitoons use their ponytail like Rayman's helicopter hair to move through the air. Rayman simply has to avoid contact with them. The fact that they are often found in groups makes this more difficult.

Antitoons with mixed behaviour can also be found in the game, such as walking and then jumping ones, or flying and walking ones.

The blue toons represent Mister Dark's army and are here to hinder your progress through the game. You can avoid them by ducking, jumping over them, or throwing your fist at them. When killed with a fist, only their eyes stay on the screen!
—Official site, Rayman Junior[1] 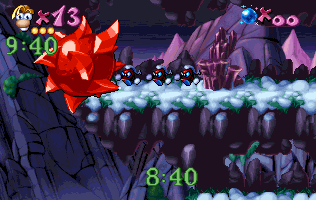 Red Antitoons appear in Rayman Junior. They kill instantly upon contact, and must be avoided at all costs.

Rayman Junior and other educational Rayman games feature red Antitoons. These invincible enemies can kill Rayman with a single touch, and are usually encountered immediately after the player gives a wrong answer. During the ending cutscene of Rayman Junior, many reformed enemies appear, including hunters and Antitoons. This suggests that Antitoons are not purely evil, and that they have the capacity to become good.

In addition to blue and red Antitoons, Rayman Activity Centre also features grey, green, pink and yellow Antitoons. They appear in an activity called the Cartoon Dance (known as "Le théâtre des Toons" in Maternelle and CP), in which the player must arrange them in certain patterns. These Antitoons perform dance routines each time the player completes a stage.

Another activity featuring Antitoons is the Super Moskito activity (known as "Les Space Toons" in Maternelle and CP). It is based off the arcade game Space Invaders.

A Fire Antitoon in the Game Boy Color version of Rayman.

In this version, the Antitoons appear in Spellbound Forest, Airy Tunes, Rainy Forest, Rocky Peaks, Ancient Forest and Arcane Forest. They can be encountered either patrolling, flying or jumping. A new type of Antitoon makes an appearance in the Rocky Peaks, this type is covered in flames and will hop towards Rayman should they see him. Once defeated, they scatter into harmful sparks.

Antitoons are featured on the cover and title screen of Rayman Advance. Rayman himself is shown in his Rayman 2 appearance, surrounded by Antitoons. Despite this he does not appear fazed, and has in fact picked up a disgruntled Antitoon and is holding it up for the viewer to see. These Antitoons look somewhat different from the ones that actually appear in the games, in that they are lighter in colour and appear more three-dimensional. On an official website, Ubisoft posted four high-resolution images depicting this interpretation of the Antitoons, with each Antitoon displaying a different emotion. 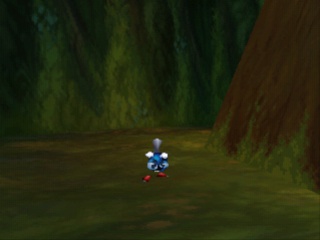 An Antitoon, as seen in the Fairy Glade in the PlayStation version of Rayman 2.

Antitoons also make a cameo appearance in the PlayStation version of Rayman 2. These Antitoons closely resemble the ones in the original Rayman game, but are rendered in 3D. They can be found in the Fairy Glade, the Sanctuary of Stone and Fire and the Echoing Caves in this version.

Antitoons only make an appearance in the Marshes of Awakening, though are few in number. Those that are encountered are all patrollers. 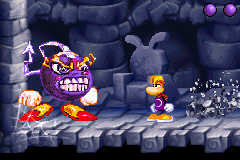 The giant Antitoon, as it appears in the Game Boy Advance version of Rayman Raving Rabbids.

A giant Antitoon is encountered in the Game Boy Advance version of Rayman Raving Rabbids. It is the first boss in the game, and is encountered during the first playthrough of the Agony Jails, which is both the first level of the game and one of the last. The giant Antitoon is purple in colour, and appears to be either partly or entirely mechanical. It is remotely controlled by an unusually intelligent Rabbid named Pink, who refers to it as his 'new toy'.

In Rayman Origins, Rayman Legends and their spin-offs

If Electoons make up all of Bubble Dreamer's good dreams, the Darktoons are the stuff of nightmares. During the First Bad Dream, Bubble Dreamer begot a foul and ferocious creature that none of us had ever seen before: Jano. Now Jano makes Darktoons like cows make milk, and before we knew what hit us, there were hundreds of them in all shapes and sizes, all causing quite a lot of trouble.
—Manual, Rayman Origins 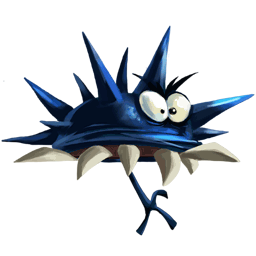 A spiky Darktoon, as it appears in Rayman Fiesta Run.

Antitoons make one of their most substantial appearances in Rayman Origins, where they are known as Darktoons, and bear a more maniacal appearance, looking less like their Electoon counterparts. They are slightly larger in body mass, and no longer wear gloves or shoes. They now possess limbs, sharper teeth, and very large mouths which make up much of their bodies; their hair is now coloured white and red, and is in a mowhawk style as opposed to their original ponytails. They are less common than they were in the original game and their only method of attacking is trying to bite the player whether they are on the ground or in the air, the ones on the ground however can only be defeated by a slam to the side and will not drop Lums. They can still be defeated by a single attack and are easier to defeat because of their larger size. In the first levels of the first five worlds, Darktoons can be seen with one of the nymphs imprisoned in their mouths which Rayman and the team have to free by chasing the Darktoon down and defeating it. They also can be seen terrorizing the Red Wizards in the level Port 'O Panic. Saving them earns the player the No Panic! trophy/achievement.

Darktoons also make appearances as enemies in various levels in Rayman Jungle Run, Rayman Fiesta Run and Rayman Mini, their behaviour is exactly the same as those encountered in Rayman Origins and Rayman Legends.