He is here to immortalise your feats! When you lose a life, you start again in the last place where he took a picture of you. Make sure he snaps your picture to validate each save point.
—Manual, Rayman

The clown photographer is there to immortalize the exploits of Rayman. If he loses a life, he returns to where he was photographed the last time.
—Official site, Rayman Junior[1]

The Photographer, also known as Clown Photographer,[1] is a character who appears in several games in the Rayman series, most notably the original Rayman and Rayman Origins. Though his exact purpose varies from game to game, he can usually be found standing near a photoboard, waiting to photograph Rayman and his friends.

In the original Rayman game, Rayman Designer and English with Rayman, the Photographer wears a chequered trench coat and blue shoes, and has a satchel slung over his shoulder. His face is never seen, but one of his eyes is visible through his long blonde hair. In Rayman Junior, the Photographer's appearance is slightly different: he wears a brown coat instead of a green and red chequered one.

In Rayman Origins, the Photographer's appearance changes significantly. His face is finally visible, and like several other returning characters, he has been changed to a Teensie to better fit the style of Rayman 2 and Rayman 3. He is somewhat different from the other Teensies, with a thinner body, slightly darker skin, large, cartoonish hands, and a purple outfit with a feathered hat. As in the original Rayman game, he wears large blue shoes and has a prominent eye. 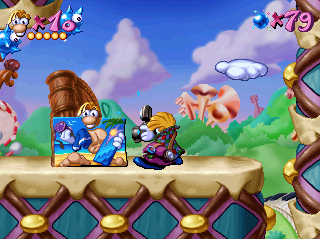 The Photographer, as seen in the original Rayman game.

In Rayman Origins, the photoboard has spaces for two characters. The positions which the players take indicate who has collected the most Lums in a level. The new photoboard shows a large armoured woman with a sword, and a skinny, loincloth-clad figure wielding an axe. The player with the most Lums stands behind the picture of the woman, the player with the second-most Lums stands behind the picture of the other figure, and the two players with the least Lums are left to peek out from behind the photoboard to get their picture taken. 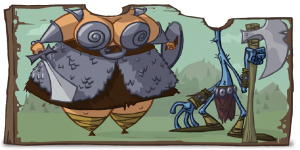 The photoboard in Rayman Origins.

In the original Rayman, Rayman Junior, Rayman Designer and English with Rayman, the Photographer serves as a checkpoint. He takes a picture when Rayman stands behind the photoboard and smiles. In the Nintendo DSi-ware version, the game will automatically take a real picture of the player as well, with the latest picture representing the specific save file. If Rayman dies and has any lives remaining, he returns to the last place where the Photographer took his picture. In all versions of Rayman 2 except the Game Boy Color version, he was replaced by the Green Lum checkpoints. In the Game Boy Color version, he was instead replaced by White Lums. 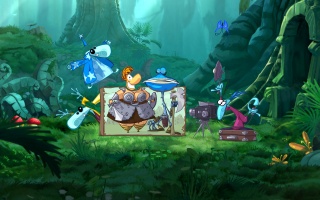 The Photographer taking a picture of Rayman and friends.

In Rayman Origins, the photoboard takes on a more significant role than the Photographer himself. It appears whenever the heroes break the last Electoon cage of a level; then they smile and pose for a picture. The photoboard is no longer a checkpoint, but an end-of-level point, much like an exit sign or a Spiral Door. Earlier in the development of the game, the Photographer was intended to appear and take the heroes' picture, but the developers chose to replace him with the Magician and his test tube (which he uses to collect and count Lums). It is not clear who actually takes the photographs in the final game, but it may be that the photographer is still present but simply standing off-screen, perhaps serving as the camera of the game itself (much like the Lakitu Bros in Super Mario 64). Despite the Photographer's absence from the final version of the game, artwork depicting him can still be seen on the official website. 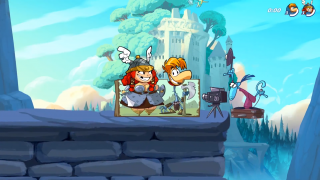 The Photographer and the photoboard in Brawlhalla taking a picture of Barbara and Rayman.

In Brawlhalla, the Rayman Update patch added numerous skins, items, and effects to the game. One of these is a new taunt called "Team Photo", which summons the photoboard from Origins and even the Photographer as he would have appeared in Rayman Origins. The taunt can let all players, no matter if they are a teammate or opponent, join in the taunt.