Outta My Way is the first level of the Ticklish Temples, a world in Rayman Origins. This marks the return of the Jibberish Jungle like environment, as the heroes begin their search for one of the Four Kings, Carnivora. This is the first level from this world, and nineteenth overall that is not included in the Back to Origins painting in Rayman Legends.

As the level begins, the heroes will need to safely jump across some thin platforms, while defeating the Lividstones who are standing on them. The first secret area can be found by crush attacking a flower bulb and bouncing to a vine above, where the entrance will be nearby. As the heroes proceed, they will reach an area where a platform sinks and there are foreground vines; they can drop down to a platform below, where the first Skull Coin can be found. The second Skull Coin can be acquired if the heroes perform the wall runing ability on a tall platform, just to the right of the nenuphars. As the heroes advance to the exit, they will encounter enemies from the Sea of Serendipity; the blowfish, and two spiky fish. 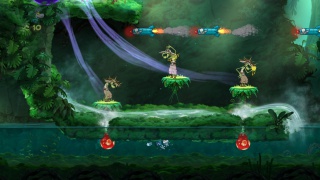 The heroes can defeat the three Lividstones on the bottom in two ways; one way is to manually defeat them one by one, the other is to hit the red explosive bulbs, making geysers appear, which send two of the three Lividstones into the path of the missiles. Either way, the geyser on the right will need to be used in order to reach a platform on the left, where two more Lividstones will be guarding the Electoon cage. Once all the enemies have been defeated, the cage can be broken. 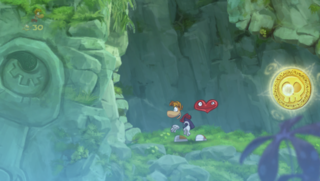 The first relic can be found in the platform to the left of Rayman.

The first relic can be found in this area; it is located in front of a platform to the left of the first Skull Coin.

Near the beginning of this area, a hunter will shoot red homing missiles which will follow the heroes; they will continue to track the heroes until they collide with something solid, land in the water, or just eventually explode. A temporary power can be collected; if the heroes dive into the water and swim over to the wall on the left, the Blue Punch can be found, which will shoot long distances. The third Skull Coin can be collected by using the Lividstones, or by hovering over to it after getting a running start. In order to reach the exit, the heroes need to safely land on top of the incoming missiles, or spin attack, jump and hover, where they can just about grab the ledge. 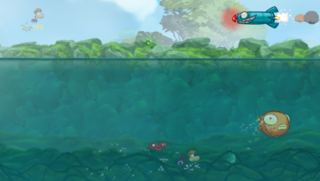 The second relic can be found underwater just to the right of Rayman.

The second relic can be found in this area; it is located underwater near the exit.

In this area, a hunter will start shooting homing red missiles at the heroes from a platform above; the fourth Skull Coin of the level is located behind him. A wooden barricade is located to the right of another hunter; crush attacking through it will lead the heroes to the second secret area. Afterwards, the heroes can collect the fifth Skull Coin if they crush attack on a flower bulb, bouncing over the spiky flowers. The exit can be found to the right of the Lividstone. 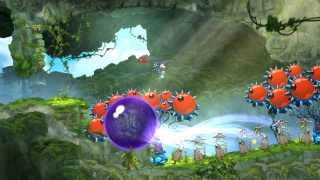 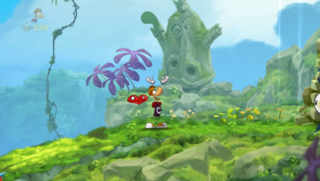 The third relic can be found inline with the statues hand directly above Rayman.

The third relic can be found in this area; it is located inline with a statues hand near the exit.