They come in dark blue and dark green varieties. Each flower is surrounded by spikes, and has a large dark-red eye which follows the player characters across the screen. Multiple flowers are usually connected to a single plant, which sprouts from a single bulb. By striking this, the player can instantly cause all flowers to snap shut like Venus flytraps and retract into the plant, clearing the way. Striking the bulb again causes the spiky flowers to return. 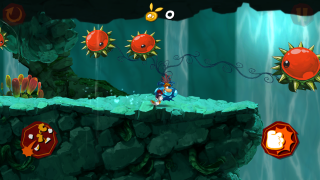 They only appear in Toad Story, where they are blue, and now their eye is white with a red pupil. They only have spikes when their eye is open, but in the Winds of Strange and Altitude Quickness, Murfy can close their eyes, and thus the flowers can be used as bouncy platforms.

Spiky flowers are the same as they were in Rayman Legends, but they are green, and their eyes stay permanently closed, leaving them to be used as platforms.