The Story Of My Rayman History 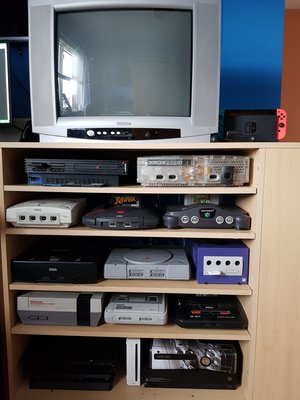 An old picture of most of my consoles.

I used to play Rayman 1 on PS1 as a kid a lot and I always loved it. I used to play it for countless hours and have so many great memories of playing it. For some reason I never played a sequel for a very long time with the only other game I played being Rayman Golf on a mobile phone years ago. After going so many years without playing Rayman, I finally started playing Rayman Origins in December 2017. I loved the game so much that I decided to try Rayman Legends next and completed that too. After that I played Rayman 3 and then finally moved onto Rayman 2. I find Rayman 2 amazing for so many reasons and I even love the story it has, but Rayman Origins is also special to me since it's the main reason I got back into Rayman and joined Rayman Pirate-Community.

I joined Rayman Pirate-Community on February 25th 2018, where I was unexpectedly greeted by a fellow Irishman (small world). At the time, I didn't really know too much about the Rayman series, and what lead me here many times before joining was looking up info for Rayman Origins.

I used to play the original game a lot as a kid, but I could only remember so much about it. I had to ask other users for help a lot regarding the sequels, as I was only playing them for the first time, and then RayWiki proved very useful to me, so I've managed to learn a lot about the series within just over a year. I've always found the members and staff friendly, I've had a lot of fun posting with other members, while also getting to know them. Aside from how much I like the Rayman series, the friendly atmosphere I encountered here as a first impression made me want to stick by and visit frequently, so I remained active.

On August 6th 2019, I was promoted to an English Moderator on Rayman Pirate-Community. I then started contributing to RayWiki a lot more often.

I'm basically a technician, I love building PC's and repairing/modding consoles, I have more consoles modified then stock. I basically just fix anything if I put my mind to it. I love playing retro games too so I basically have all the consoles I could possibly want and then some. I'm generally nice to people and always offer advice to them if they need help, but I hate cheaters and liars so much that it brings out the bad side of me when I see them.

I've always liked Super Mario games even back before Rayman existed since I was only 3, but when I did get around to it, I realised Rayman is amazing.

My first console was a NES/Famicom clone with 168-in-1. My first genuine console was a Sega Mega Drive II, I used to have a 6 in 1 cart with Streets Of Rage, Golden Axe, Columns, Super Hang-On, World Cup Italia 90 and The Revenge Of Shinobi. I also had a copy of Sonic The Hedgehog 2 for it and a Batman game (I can't recall which one exactly at the minute). After that I got a PS1 where I used to have Hercules, Gran Turismo, Crash Bandicoot Warped and of course, Rayman 1. Those were the ones I had when I was only kid and by the time I got a PS2 I was almost a teenager (I think I was 11).

The PS2 is one of my favourite consoles of all time, because while not being the most powerful one, it had a massive game library with some really amazing titles out there. I prefer the original Xbox over it for some games as it's much more powerful, but the PS2 is the one I had for a long time even before getting the Xbox. I just have so many memories of bringing it to my Nanny's and playing GTA: San Andreas with my uncle, while staying up half the night. 😂

There was also the Eyetoy games which I had a lot of fun with over the years, ah memories.

I like to have a few drinks from time to time and just relax.

Rayman Games I Own 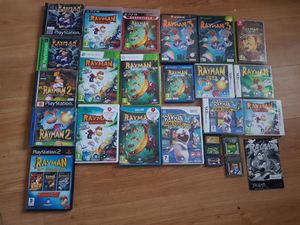 The majority of the Rayman games I own are in this image. Some others are digital though and I forgot about the Jaguar cart along with Rayman Rush while taking this picture..