From RayWiki, the Rayman wiki
(Redirected from Zombie chicken)
Jump to navigation Jump to search

We can no longer even keep track of all the sinister results provoked by the arrival of the pirates : disturbances in overall harmony, the proliferation of piranhas, giant spiders and caterpillars, etc.... Terrified by all these events, the hens began laying deadly eggs, out of which burst the horrible Zombie Chickens...
—Manual, Rayman 2

Zombie Chickens, also known as Scowlers[1], are enemies found in the gloomier parts of the Glade of Dreams. They first appear in Rayman 2, where it is said that they are the result of hens laying dead eggs out of terror at the events caused by the Robo-Pirates. They can also be seen in the Game Boy Advance version of Rayman 3 and very briefly in the console versions. Ghostly, spirit-like versions can also be seen floating around levels in Rayman M and its remakes. In the manual of Rayman Origins, it is explained that when the nymphs were on their way to create Rayman, a group of Zombie Chickens distracted them, causing them to lose a sack of Lums that they were carrying— as a result, Rayman was made without limbs.

It is unknown whether the Zombie Chickens have any connection to the Denys or the Minisauruses, other chicken-like creatures found in the Glade of Dreams.

Zombie Chickens have slightly deformed chicken beaks with cartoony eyes and grey-brown feathers on their heads. They wear long, ripped, brown cloaks and their arms look like human skeleton arms that are bent in a haunting way.

The Zombie Chickens appear in levels containing swamp-like elements, such as the Bayou and the Marshes of Awakening. They can hurt Rayman by making contact with him, though upon touching Rayman the attacking Zombie Chicken will fall apart. They spawn by seemingly rising up from the ground or swamp water.

There are two types of attack pattern that Zombie Chickens will utilise. Some will actively follow Rayman and as such must be shot at in order to prevent damage. Others will simply travel forwards to the area Rayman was occupying when they spawned, and as such, can be dodged by stepping out of their way, but can also be shot at.

In the Rayman Revolution manual, it is incorrectly stated that the Zombie Chickens are allies of the Robo-Pirate army.

A Zombie Chicken in Rayman 2 Forever.

Zombie Chickens do not feature as an obstacle in Rayman M and Rayman Arena, but they have cameo appearances in the First Ruins, Shadow Plains and Nebulous Tower.

Terrorized by the wars against the robot pirates, the hens laid dead eggs from which the ghoulish Zombie Chickens emerged.
—In-game description, Rayman 3

Zombie Chickens only appear in the tunnels of the Desert of the Knaaren, where they will spawn from the ground or walls, and will threateningly move toward Rayman. Unlike in Rayman 2, they circle around Rayman before moving in to make damaging contact with him. Some spawn when Rayman picks up their eggs, and it will be necessary for Rayman to put down the egg and deal with the Zombie Chickens in order to slowly progress through to a pressure switch, which will remain open once an egg has been placed upon it.

The Knaaren are fond of Zombie Chicken eggs; many vending machines containing them can be found while traversing the tunnels. 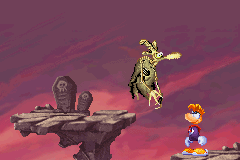 A Zombie Chicken in the Void of Bones.

In the Game Boy Advance version of Rayman 3, Zombie Chickens appear identical to those featured in Rayman 2, and exhibit similar behaviour; they will attempt to come into contact with Rayman in order to deal damage. They can be found in Void of Bones, the Underlands and Wicked Flow. 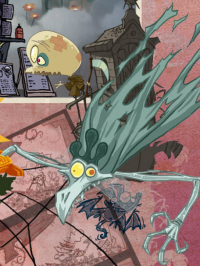 A Zombie Chicken, as seen in the Daily Bubble. While being mentioned in the manual, they do not appear in the final version of Rayman Origins.

While they do not make an appearance in the final product, the manual refers to Zombie Chickens as being the cause of Rayman's lack of limbs, due to them distracting the nymphs and causing them to lose some of the Lums they had gathered in order to create Rayman.

A Zombie Chicken was also featured in one edition of the Daily Bubble, and one can be seen in the front cover of the game.