The Desert of the Knaaren

The Desert of the Knaaren is the fifth of the nine levels of Rayman 3. This is where the native species of this land, the Knaaren, dwell. The Knaaren carved their tunnels out of the solid rock, and they guard their domain fiercely and effectively, constantly patrolling the many passages.

Rayman is sent here from the Land of the Livid Dead by the second Teensie doctor, Roméo Patti. Like Otto Psi, Roméo was unable to extract the Black Lum André from Globox's body, so Roméo sends Rayman and Globox to the Desert of the Knaaren, where the third Teensie doctor, Gonzo, has his office. Along the way, Rayman and Globox fall into the tunnels, and Globox is captured by the Knaaren. Rayman must fight his way past Knaaren and Zombie Chickens, and solve many puzzles along the way. Eventually he is captured by Reflux, the champion of the Knaaren, who challenges him to a duel in the arena. Once Rayman succeeds, Globox is freed, and Gumsi, the child-king of the Knaaren, uses the Sceptre of the Leptys to their god, the Leptys, who grants Rayman the grimace ability as a reward. The heroes then meet up with Gonzo, who summons the other two doctors. Together they finally manage to extract André, who escapes and tracks down the humiliated Reflux. André promises Reflux the opportunity to destroy Rayman once and for all if he will steal the Sceptre of the Leptys for him, and his promise is fulfilled in the Tower of the Leptys, the game's final level.

The Desert of the Knaaren is a desert world, and crossing it requires use of the tunnels, in which live the titular Knaaren.

This is a world that is a harsh, scorching plain of sand, dotted by rocky outcrops and yawning chasms. The huge dinosaur-like skeletons which lie on the sand resemble those seen in the Cave of Bad Dreams in Rayman 2. The desert looks hellish at first sight. However, beneath the barren, lifeless surface is a vast tunnel and cave system that delves deep into the rocky under-layers.

The first stage of the level requires Rayman to jump across several giant bones, fighting several Slapdashes as he goes. Globox has already run ahead of him as the desert sands burn. Eventually Rayman and Globox reach a small cave, on the other side they find themselves at the bottom of a canyon where a Hoodlum airship is dropping off several Hoodmongers and Hoodmonger Soldiers. Globox consumes a barrel of plum juice which gives him flight, whilst Rayman must use the Throttle Copter to work his own way out of the canyon. Eventually he frees two Teensies who tell him about the Knaaren Tunnels which Rayman and Globox must use to cross the desert. The duo enter the tunnels, but Globox is quickly captured by the Knaaren and Rayman is forced to run. Finding himself in a room full of Knaaren, he must use a Shock Rocket to sound a gong which distracts the Knaaren whilst he makes his escape. In the next room, he must take a Zombie Chicken egg and carry it to a switch to open a door, and then perform the gong trick again to bypass one last Knaaren. After opening a final door using a Zombie Chicken egg, he can move on to the second stage.

As Rayman gets past the first stage of Knaarens, he enters a room where he needs to get to the top. At the top, he sees Globox being carried away by a Knaaren and must find a way to follow them. His first task is to get one of the Knaarens that are nearby to chase him onto a large switch which will cause some floating platforms to align, making a path up to the top of the large the Leptys statue. If Rayman takes a detour whilst jumping these platforms, he can free a few Teensies who will give him a Vortex to lower a meadowscrew on the ground and reach a secret area that contains a green gem. Once this is done, Rayman must work his way up to top of the statue, using floating platforms and LockJaws, where he releases some Teensies who will hand over a Throttle Copter with which he can use to get to the top, and leave the second stage.

The corridor ahead is blocked by several Knaarens so Rayman must climb between two walls and stay on the top, before helicoptering down past some green acid to continue out of that room. Rayman will now need to distract a Knaaren by using the Shock Rocket to hit a gong. It will create a loud sound, making the Knaaren run to it, to which Rayman will be able to get the LockJaw to advance through the following area. The next small area is straight ahead, but there are two Teensie cages, rescuing one will give him a pile of yellow gems, and the other a green gem. After passing, Rayman will be required to perform the gong trick several times as he makes his way through a maze of tunnels and ledges, before climbing a large structure at the top of which lies the path onward.

Rayman continues to what seems like a quiet room, but as he advances to a large ledge, several groups of Knaaren come walking closer and closer to attack him. The only way out is to throw himself into the darkness below. He finds himself deep in the tunnels with some spirits, and must pass them and carry various rocks to different switches scattered throughout the level in order to proceed. However, only certain paths will take his weight, and he must be careful not to lose the stone he is carrying. In amongst all this he will be required to perform more daring jumps. Eventually, another Knaaren group will corner him, and the only way he can escape is by destroying the ground below him and taking yet another tumble. Things don't get any better just now though, as it is here that he will meet the Knaaren champion Reflux, who will take him to the mysterious "arena".

Rayman is in the Knaaren arena, in the company of Gumsi, the Knaaren king, Reflux, his champion, and their new prisoner Globox. To earn his and Globox's freedom, Rayman must fight and defeat Reflux. If he cannot, his corpse shall be burnt. Reflux begins with a spin attack, but will eventually tire, allowing Rayman to get some hits in on him whilst he recovers. Rayman can drop down to the side of the raised platform and grab some Heavy Metal Fists in order to increase fire power, but flames from the lava pit below will attack him constantly whilst he does this so he must be careful. Occasionally, Reflux will call meteors down from the ceiling. Even if Rayman avoids them, small fires will remain where they fall for the rest of the battle, making it even harder to retain stamina. Eventually, however, Rayman will come through and beat Reflux. Gumsi reacts angrily to this and begins to beat Globox, but André will scare the child king by yelling from Globox's stomach and Gumsi will admit defeat.

Intermission - The power of the Leptys

Gumsi scolds Reflux for his loss, and announces that Rayman will receive "The power of the Leptys" as his reward for victory. Rayman receives the power, but its nature is not yet revealed. 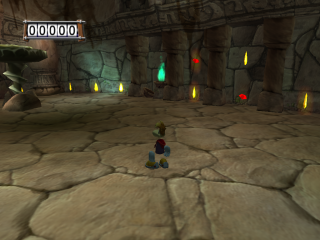 As Globox and Rayman make their way out of the tunnels, no longer pursued by the Knaaren, the former wonders what Rayman's new power is. Their path is blocked by a meadowscrew, but there is no time to worry about that as they are attacked by a Hoodmonger. Rayman defeats the Hoodmonger and discovers that his new power is to turn Black Lums into Red Lums through using the grimace. Armed with this new ability, Rayman defeats a second Hoodmonger, gets a Vortex, lowers the meadowscrew, and the duo leaves the inside room as they continue their mission.

Stage 7 - Back in the desert

Now back outside, Rayman must defeat a Hoodoo and a Hoodmonger Officer guarded by it to reach a barrel of plum juice for Globox. The plum juice gives Globox both flight and bubble power, the latter of which Rayman can use to open a cage to get the Heavy Metal Fist to break open a nearby barricade. But before that, Rayman must defeat two Lavomatrixes to allow Globox to drink the barrel of plum juice. Once through the door, he must defeat several Hoodstormers and Stumblebooms to gain a LockJaw fist. He must use this same power up to beat a Spineroo. He can then find secret area marked by a fire containing several gems. Once he has them, he can meet up with Globox and finally enter the Doctor's office.

The eighth and final section.

In this stage, Rayman must time when he stands on the switches in order to defeat the Hoodmongers across a pit in the Doctor's waiting room. Once he has beaten them, a platform will rise, allowing him to cross the pit. If he drops down once the platform is raised he can find a door leading to his next secret filled with yellow and red gems, including a green gem. Now, he can take Globox to the third and final Doctor. Though like the last visit to the doctor, Globox disagrees to go in. For some odd reason, Rayman uses the LockJaw to grab Globox and force him to go in.

André and his acolytes alongside Reflux.

Gonzo, along with Otto Psi and Roméo Patti are finally able to remove André from Globox's stomach by playing a slower tune then the first two doctors played. However, André escapes into the desert and gathers several Black Lums, announcing that "Nothing is lost" as he knows someone who can help them. This someone turns out to be Reflux, who agrees to steal Gumsi's Sceptre in return for another chance to defeat Rayman.

This level has the most stages of any other in Rayman 3 (eight) and is the only level to have more than one FMV sequence.