A similar projectile attack would later feature as a temporary obtainable power-up in Rayman Origins and Rayman Legends, called the Blue Punch. 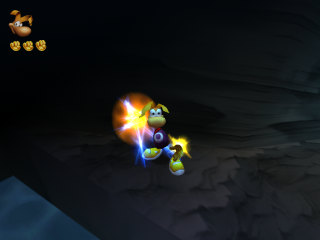 Rayman charging his magic fist, with the Power Fist equipped.

The manuals for both Rayman 2 and Rayman Revolution contain a short story detailing how Rayman came to be captured by the Robo-Pirates shortly before the beginning of the game. According to this story, Rayman lost most of his powers, including the magic fist, when the Robo-Pirates destroyed the Heart of the World. This indicates that Rayman first received the magic fist at some point between the events of Rayman 2 and the previous game, and that he was already acquainted with the ability by the time he regained it at the beginning of Rayman 2.

The magic fist is re-obtained at the beginning of the game, Globox gives Rayman a Silver Lum from Ly the Fairy, after which he can shoot a glowing magic power offensively from his hands. It is able to attack enemies, break doors reinforced by wooden-sparadraps, activate switches and be used to move plums. It is thanks to this ability that Rayman and Globox were able to escape the Robo-Pirate's prison ship called the Buccaneer, by braking a metal grate (wooden sparadrap in the PlayStation version) in his cell that links to an escape chute. The fist has a white colouration before it is upgraded.

Once Ly has been rescued in the Fairy Glade, the magic fist can now be used to magically tether and swing onto Purple Lums, in addition to its previous capabilities, Rayman also uses a similar method to shoot and tether to Ssssam's scarf, who will then waterski Rayman across the Marshes of Awakening. During this time, the fist will now have a blue colouration, until the next and final upgrade is obtained.

Rayman will later encounter Globox in the Canopy, who gives Rayman the ability to charge a magic fist before releasing it, potentially tripling the damage it can deal, unlike a charged telescopic fist, Rayman will automatically release a charged magic fist after a certain amount of time, and will not keep it held indefinitely. After this upgrade is obtained, the magic fist will have a yellow colouration, and will remain in this colouration for the rest of the game.

Rayman can have an extra upgrade if he collects a Power Fist, which lasts for 3 hits, after which his fists will return white again. This puts the damage that Rayman's fist can deal at its maximum. Rayman can collect them by finding them in a level, or by winning them in a bonus level.

The magic fist can rebound off walls and barriers, this property can be used tactically against stationary enemies such as Barrel Pirates.

At the beginning of the game, instead of giving the magic fist ability, The Silver Lum delivered by Globox restores a simple version of Rayman's telescopic fist, where he can merely punch in close-quarters, and not over large distances. Rayman then uses this telescopic fist to escape from the Buccaneer, and continues to use it throughout the Woods of Light, the first level of the game. At the end of the level, the Grand Minimus gives him another Silver Lum from Ly; this one grants Rayman the magic fist power, and he keeps it for the duration of the game.

Unlike in the main Rayman 2, Rayman can obtain the ability to charge his fist via the Magic Well, the Silver Lum given in the Canopy merely upgrades the damage the base magic fist can deal instead. Rayman also needs to obtain an upgrade before the magic fist can rebound off walls, but they can also be upgraded further to rebound off enemies, ensuring that Rayman can attack groups of enemies more efficiently.

All characters possess the ability of the magic fist in the races, with the main function to trigger switches and grab onto Purple Lums.

In Rayman Rush, it has the extra function of freezing an opponent when hit.

Although the magic fist doesn't appear in the Nintendo DS version of Rayman Raving Rabbids, Rayman has a similar ability to shoot Yellow Lums.