The Nymphs are a group of fairies who appear in the Rayman series. They make their most prominent appearance in Rayman Origins. The Head Nymph, Betilla, also appears in the original Rayman; the other nymphs are her younger sisters. The first trailer for Rayman Origins shows a flashback in which Betilla is levitating in a stone circle in the Primordial Forest, a location from the original game. With her hands she gathers rays of moonlight and weaves them into a glowing orb, which solidifies to form Rayman – this is the origin hinted at in Rayman 2. Rayman was created by the Nymphs to preserve the equilibrium of the universe from the nightmares of Polokus.Their role in the game is to provide new powers to Rayman and his friends when rescued from a Darktoon cage.

While they all seem to look different in their own way, they do share some similarities:They all have small transparent fairy like wings (with the exception of Big Mama), hats and curvy bodies. 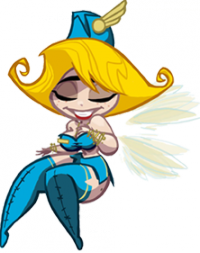