Dark Sewer is the third and final race course of the Beginner League in Rayman M. Completing this course will unlock all three levels of the Advanced League.

Akin to the Tomb of the Ancients in Rayman 2: The Great Escape, this course is set in an underground location with many paths to choose from. While one could run on the higher level on the left and slide down the steps, another could run along a thin wonky plank over sewage. Either path leads to a long wet slide with electric fences that swap sides when activated with switches. There are then two tunnels to choose from, again alternating (if a switch was hit, one can be locked while the other is open), which lead to a grated wall with spinning electric bars. At the bottom is a numbered box that reveals a bounce pad that will allow the player to avoid the electric bars.

The player then arrives at a large pit of sewage, where at one side there are three pillars - one could either cross the sewage on lowered pillars, or flick the switch in the middle of the three and reach a Purple Lum and take them to the higher level on the right full of speed ramps that are in all sorts of directions. Below that is a path of electric fences, speed ramps, and a short moving wall the player has to avoid. There are now three levels of platforms one could take, and flicking switches will make certain parts of them rise and lower. After this, there is another slide that leads to the finish line.

The Popolopoï mode for this level is unlocked when the player wins at least two courses in the Beginner mode, which can be completed in any order. 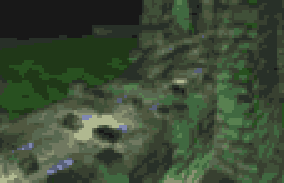 Dark Sewer in the menu of Rayman Rush.