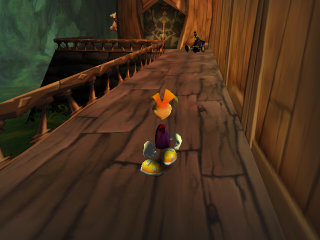 A sleeping purple Henchman 800 in the Training Center.

The Elite Troop Training Center is a Robo-Pirate school located in the Menhir Hills in all versions of Rayman 2.

The Training Center can only be reached by using a walking shell to cross a narrow tunnel full of nettles. In Rayman Revolution, seven Yellow Lums are found here, as well as four Familiar Spirits. The main inhabitants of the Reformatory are twenty-one Robo-Pirates. It consists mainly of one large building with various rooms. The place is much bigger than the Military Academy, having a garden and a cellar.

Rayman must make his way into the Training Center to save his friend, Clark the Giant. Rayman must either smash the walking shell he is travelling on into a door to break it down or throw a keg at it. The only entrance is locked and guarded by a sleeping green Henchman 800, so he must destroy the Robo-Pirate and hit a switch on the wall to open it. There, he finds Clark, who has destroyed twenty red Henchman 800s single-handedly, but has swallowed a rusty part, and needs the Elixir of Life to recover. Rayman runs out of the Training Center to find the Cave of Bad Dreams.

After Rayman returns to the Menhir Hills, the rest of the Training Center will become available. Clark will smash down several of the Center's walls so Rayman can pass. Rayman has to manually open a steel one, as Clark only breaks down wooden walls. The exit is behind another wooden wall.

In Rayman Revolution, the cellar can only truly be explored after completing the Canopy and getting a stronger magic fist upgrade from Globox, as a long stretch of nettles are in Rayman's way. If Rayman lights a torch with his fist and puts a powder keg in front of it, he can fly over to the other side, where he can find the last cage and the last few Yellow Lums.