Nettles are invincible enemy plants found most notably in Rayman 2 and Rayman M. They also make smaller appearances in Rayman 3 and its Game Boy Advance and mobile phone versions.

In Rayman Origins, a group of major enemies with several physical similarities with the nettles make an appearance. These creatures are known as Darkroots, however, they exhibit different behaviour.

Nettles are more common in Rayman 2 than in any other game. Here they are most often found in sanctuaries – the level beneath the Sanctuary of Rock and Lava is almost entirely filled with them; they seem impervious to the heat of the level's fire and lava. They protrude from walls and snatch at Rayman; once they take a hit from his magic fist, they retreat into their holes for a few seconds. They soon pop back out and continue to snatch at Rayman if he is still within their range. They are exceedingly strong, even breaking through walls of solid rock at times.

Avoid these objects, if they hit you, you will be slow down in your race...
—Manual, Rayman M

Nettles appear as obstacles in various race tracks, and behave similarly to how they do in other titles in the series; where they will impede the player should they come into contact with them, and will recede temporarily if shot at. Unique to this game are the variations of nettles, where they can appear in their normal form from Rayman 2, a skeletal form, or a metallic form.

In Rayman 3 and its handheld versions

Your best friends if you need to grasp the nettle and be stung into action!
—In-game description, Rayman 3 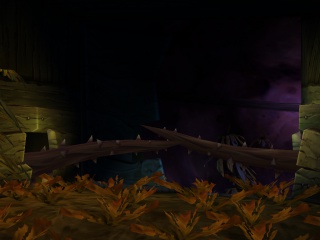 Nettles in the Bog of Murk.

In Rayman 3, the nettles make a small appearance in the Bog of Murk. There are only two here, and they behave in almost exactly the same way as the ones in Rayman 2. They emerge from the side walls of a passageway and impede Rayman's progress, harming him if he touches them; as in the previous game, one hit is all it takes to make them retreat for a few seconds. They are not seen again in the game. 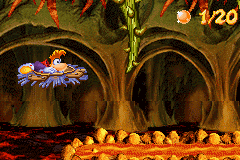 Rayman rides a nenuphar past a nettle in the Game Boy Advance version of Rayman 3.

In this game, nettles appear in only one level: Wicked Flow. They are green in colour, and have large yellow spines. Like in Rayman 2, they pop out of the ceiling or the ground at regular intervals, and Rayman has to shoot them to make them retreat and avoid getting hurt.

In the mobile phone version of Rayman 3, nettles identical to these are present in the volcanic levels.