Next, he created the simpler creatures. First came Clark. His incredible strength proved useful in carving out the landscape, to fold hills into the monotonous plains and to deviate the too-impetuous rivers.
—The Knowledge of the World, Rayman 2

Clark the Giant is a character who appears in Rayman 2 and its remakes. He makes his first appearance in the Menhir Hills, except for Rayman Revolution, in which he first appears in the Minisaurus Plain, or the East Plain if the player does not access the area before obtaining the first mask. Clark is one of Rayman's strongest allies, and can hold his own against even a large group of Robo-Pirates. His only weakness is his somewhat sensitive stomach.

Clark was one of the first of the people created by Polokus in the early days of the Glade of Dreams. Clark was created to fold the land into hills and to dig out valleys and lakes.

A mountain of muscles, Clark is an army all by himself. With one mighty blow, he can send an entire regiment of pirates flying. His only weak point: a somewhat sensitive stomach. This can cause problems, especially when, in the heat of battle, he munches a robot that’s a little too rusty...
—Manual, Rayman 2

Clark, like Globox and Carmen, was one of the characters-in-distress that Rayman had to help out following his adventures in the Sanctuary of Water and Ice (Whale Bay in the PlayStation version of Rayman 2). In all versions of the game, Clark plays his first major role in the Menhir Hills and is the first of the People that Rayman must save.

After dashing through the dangerous the Menhir Hills, Rayman arrives in a Pirate Academy. There, he discovers that all the Robo-Pirates have been destroyed, thanks to Clark. Clark, however, accidentally swallowed a rusty robot part in the heat of battle and, thanks to his sensitive stomach, became sick—possibly fatally. To save his friend, Rayman must travel to the Cave of Bad Dreams to find a cure. Though before the guardian of the Cave of Bad Dreams did not allow Rayman entry, Clark gives Rayman the knowledge he needs to enter.

Following Rayman's triumph over the cave guardian, Rayman returns through the trials of the Menhir Hills and gives Clark the Elixir of Life. Grateful and full of rejuvenated energy, Clark agrees to be Rayman's bodyguard for the duration of the level. Clark uses his special ability—crashing through wooden walls—to allow Rayman to pass through the academy and into the next level.

Tomb of the Ancients

Clark was somehow captured following the events of the Menhir Hills, and in the end was brought to a secret laboratory deep within the Tomb of the Ancients. By the time Rayman finds his powerful friend, it is too late; Clark has been brainwashed by the Spyglass Pirate and is being controlled via remote control. This leads to an unexpected boss battle against Clark.

To defeat Clark, Rayman has to press three switches to turn on a laser beam, and then trip the giant on it. Once the giant was tripped, Rayman could attack the remote-control pack on Clark's back. After a while of doing this, the pack was destroyed and Clark was saved once and for all. After doing a dance with Rayman, Clark assists Rayman in reaching the warp spot that takes him to the next level.

Clark's final appearance in all the versions of Rayman 2 is after the fight with Razorbeard. Clark is waiting with other good characters for Rayman's return. 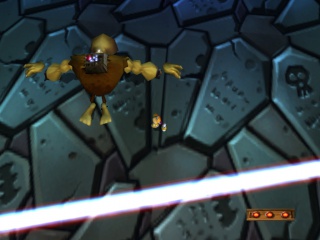 Clark's primary role in Rayman Revolution, other than his level appearances, is opening up Globox's House, Rainbow Creek, and the Iron Mountains. He is visited after every sanctuary level.

In Rayman Revolution, Clark's first appearance is either outside or at the East Plain in the Minisaurus Plains. If Rayman has not completed the Sanctuary of Water and Ice and heads along the path towards the East Plain, a gang of Robo-Pirates will ambush him. Though it will look like he is defeated, Rayman is happy to see Clark ambushing the pirates. Clark chases the Robo-Pirates into the East Plain, yelling threats. If Rayman never trots in this direction before his destination becomes the Menhir Hills, this scene will not happen.

Clark's next appearance is following the Sanctuary of Water and Ice. The Teensie at the Minisaurus Plains' Teensie Circle will tell Rayman that Clark is waiting in the East Plain. If Rayman enters the Plain and ascends the cliff-side bridge, he will eventually find Clark. Clark uses his wall-breaking ability to pave entry to the Globox's House area of the Front. Clark does not re-appear until the Menhir Hills level.

The capture of Clark

Clark plays the same role after Rayman has completed the Sanctuary of Stone and Fire. The Teensie of Globox's House tells Rayman that Clark is waiting for him by the Whale Bay. If Rayman passes the Whale Bay and follows the nearby beach, he will encounter Clark waiting by a bridge. Clark will crash through a wooden wall, and he and Rayman pass through it.

Clark then passes through another wooden wall at the far end of a mountainous arena. However, before Rayman can follow, Robo-Pirates flood out of the hole, presumably capturing Clark in the process and taking him to the Tomb of the Ancients. Rayman must battle wave after wave of Robo-Pirates arcade-style; however, once the road to the Rainbow Creek is clear Clark is nowhere to be found.

Later, following the Sanctuary of Rock and Lava, the Teensie of the Rainbow Creek tells Rayman that Clark's location has been found. Rayman must return to Skull Cave to locate the Tomb of the Ancients.

Clark's final act follows the Tomb of the Ancients. Rayman must meet Clark by a wooden wall near the Rainbow Creek's Teensie Circle. Clark smashes the wall, allowing Rayman access to the Iron Mountains.

In Revolution, Clark makes a final in-game appearance after Rayman has completed the Prison Ship. He joins Rayman's other friends in waiting for him by the Flying shell taking Rayman to the Crow's Nest.

Clark next appears during Revolution's final credits, in which he plays the bass guitar in a band with Rayman's other friends.