You incompetent imbecile!
—Admiral Razorbeard to the Spyglass Pirate, Rayman 2

The Spyglass Pirate,[1] also known as the Creole Pirate,[2] is a unique Robo-Pirate character who appears in Rayman 2 and its remakes, as well as making cameo appearances in Rayman 3 and Rayman Dictées.

The appearance of the Spyglass Pirate is somewhat different from those of the other Robo-Pirates. While he is still robotic, he looks more like a slightly chubby stereotypical pirate. The lower part of his mechanical body is coloured green to resemble trousers. He wears a yellow scarf covered with red polka-dots around his waist, and has a red-and-white striped bandana tied round his head. Like most Robo-Pirates, he is noticeably taller than Admiral Razorbeard.

In the Japanese version of Rayman Revolution, the Spyglass Pirate is made of a grey metal, with his lower body coloured a light turquoise.

The Spyglass Pirate appears to have been in charge of the ground operations during Razorbeard's campaign. He was a mechanical genius, and created many dangerous devices.

In the original version of Rayman 2 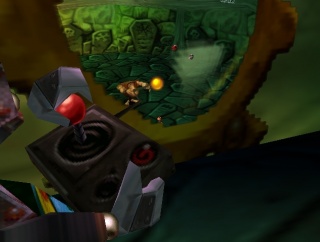 The Spyglass Pirate appears to mainly serve as Admiral Razorbeard's right hand. Most of his appearances involve him informing Razorbeard of Rayman's progress, the first report the player sees him provide is given prior to Rayman's arrival to the Bayou. It is his report of Rayman's arrival to the Glade of Dreams' swamp that causes Razorbeard to dispatch the warships Rayman would encounter in the first half of that level.

He is next seen reporting to Razorbeard as Rayman is en route to the Precipice, informing Razorbeard of Rayman's acquisition of two of Polokus' masks. This causes Razorbeard to throw his hat on the Spyglass in frustration, before dispatching more warships to the Precipice, demanding Rayman be captured, dead or alive.

He later plays a more active role after reporting to Razorbeard about Rayman's acquisition of the third mask, which causes Razorbeard to threaten the Spyglass with an extreme punishment should Rayman manage to find the fourth mask. The Spyglass then is encountered at the Technical Check-up, having set up a trap for Rayman, using a device to control his friend; Clark, who he then uses to attack Rayman. Rayman is able to destroy the device controlling Clark, and the Spyglass departs unseen.

Before the final boss battle in the Crow's Nest, Razorbeard says that he will punish the Spyglass Pirate for his consistent failure to stop Rayman by seeing how well he would swim in molten lava. He then orders the Spyglass Pirate to prepare the Grolgoth for him in the meantime. It is not clear whether this punishment was ever carried out, and the fate of the Spyglass Pirate remains unknown.

The Spyglass Pirate makes an appearance in the Gloomy Island as part of his expanded role in the PlayStation version.

The Spyglass Pirate in the PlayStation version retains the appearances he makes in all other versions of Rayman 2. His only additional appearance is in the Gloomy Island, where he is the one controlling the Robot Dinosaur via remote, in the Reformatory for Disturbing Children. It is stated by the Grand Minimus that he is using the Dinosaur to find the fourth mask. The Robot Dinosaur is used in an attempt to stop the baby Globoxes from escaping the facility, after Rayman is able to open its main gate, but is unable to do so as the Robot Dinosaur fails, and the Spyglass discovers that he forgot to fuel the machine. 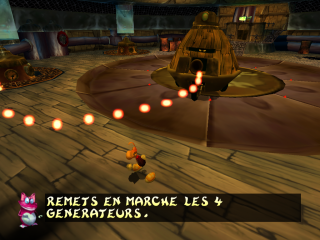 The Spyglass Pirate inside Boss Biditank.

In addition to the appearances seen in all versions, the Spyglass Pirate makes additional appearances exclusive to this version, to further impede the progress of Rayman and his friends. He appears leading an attack on Clark and Rayman at the entrance to the Rainbow Creek. He makes another appearance in the Pirate Factory, where he is the pilot for the Boss Biditank, a new freshly developed weapon that the pirates have made, and battles Rayman with it. He will jump out the Biditank at times to switch off floor-switches that control a laser that Rayman uses to damage the Biditank. However, his efforts are in vain, as Rayman is able to activate the laser enough times to damage the Biditank, and the Spyglass flees thereafter. 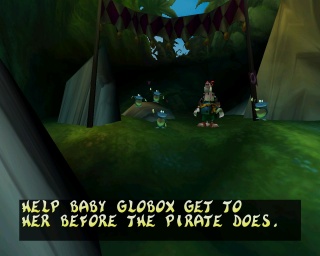 The Spyglass Pirate preparing to race with a baby Globox in the Bonus level of Rayman 2.

In all versions of Rayman 2, barring the PlayStation version, if Rayman has collected all the Yellow Lums and broken all the cages in a level, the player can enter a bonus level. The bonus level involves a baby Globox racing against the Spyglass Pirate to reach a Ludiv, who will restore Rayman's health if the baby Globox wins, or will be scared off if the Spyglass wins.