Rayman receives his fifth and final power from Betilla the Fairy.

Things are going to get really wild from now on, Rayman. You'll have to be very quick.

Now you can run faster. To run, press O while walking. 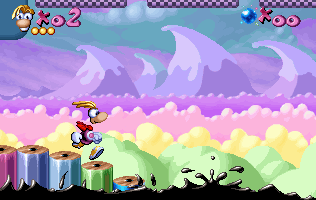 The ability to run is the fifth and last power that Rayman is granted by Betilla the Fairy in the original Rayman game, at the end of Mr Stone's Peaks. Running allows him to move faster but also to jump and helicopter further. Since the button which must be held in order to run is the same button which must be pressed in order to pull a grimace, Rayman essentially loses the latter ability once he is able to run, but this has no in-game effects other than no longer being able to scare the tall Livingstones.

Running, known in the game as sprinting, is one of the basic abilities available to all characters from the beginning of Rayman Origins and Rayman Legends. In these games it is augmented by additional powers, such as the ability to run up walls and jump off them. The same sprinting makes a return in Rayman Jungle Run, Rayman Fiesta Run and Rayman Adventures where it is done automatically.