The grimace is Rayman's initial line of defence, which he has been capable of right from the beginning of the original Rayman game. To grimace, Rayman stretches his mouth wide with his hands, sticks out his tongue, rolls his eyes and makes a gurgling sound with his throat. The power's functions vary from game to game.

Rayman doing a grimace in the original Rayman game.

In the original Rayman game, the only use for this power is to scare the tall Livingstones; when they see the grimace, they are driven mad with fear and start to run uncontrollably, usually killing themselves by falling into water. In the first part of the Swamps of Forgetfulness, the grimace is temporarily replaced by the magic seed which Rayman receives from Tarayzan. When he defeats Mr Stone in Mr Stone's Peaks, Betilla grants him the power to run, which permanently replaces the grimace in all versions except the Nintendo DSi version. 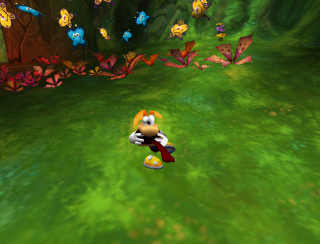 Rayman doing a grimace in Rayman 2. This animation is triggered only in the Dreamcast, iOS and 3DS versions by letting Rayman idle for some time.

The grimace does not appear in most versions of Rayman 2; however, in the Dreamcast, iOS and 3DS versions of the game, Rayman occasionally performs a grimace at the camera if left idle by the player for a time. He also does this in the Game Boy Advance and N-GAGE version of Rayman 3. 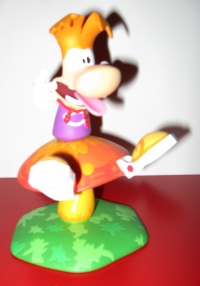 A promotional statue for Rayman 3 of Rayman performing a grimace.

In Rayman 3, Gumsi uses the Sceptre of the Leptys to grant Rayman this power after he defeats Reflux in the Desert of the Knaaren. Rayman can then use this power to convert Black Lums back into Red Lums by making them laugh after defeating their Hoodlum costumes. It is known as ‘The Power of the Leptys’ in this game. A promotional statue to Rayman 3 which recreates the grimace artwork was done in a limited number to hundreds of units worldwide, very few containing a box and an artwork book with conceptual art of the game. 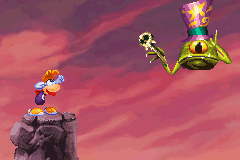 Rayman uses his grimace to taunt Jano in the Game Boy Advance version of Rayman 3.

Much like in the Dreamcast, iOS and 3DS versions of Rayman 2, Rayman does not use the grimace to any practical effect, nor can it be willingly triggered by the player; it plays as an idle animation if the player does not give an input for some time. Rayman can also be seen using the grimace to taunt Jano prior to their fight. 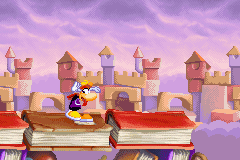