The Sceptre of the Leptys, also known as the Ancestral Sceptre, is a powerful magical artefact encountered in Rayman 3. 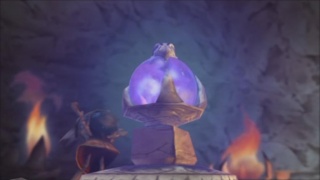 The Sceptle glows as Gumsi uses it to grant Rayman the grimace ability.

The Sceptre can be used to grant the wielder the power of the Leptys, a god whose strength is seemingly imbued in it. It is kept by Gumsi, child-king of the Knaaren, a race of sadistic desert-dwelling creatures who worship the Leptys. When Rayman defeats the Knaaren champion Reflux in an arena battle, Gumsi grudgingly uses the Sceptre to call upon the Leptys to grant Rayman the grimace ability as a reward. Gumsi attaches his own staff to what appears to be a ball of stone in front of an enormous statue of the Leptys; this causes the stone to glow brightly and rise out of the floor atop a carved pillar, while the eyes of the Leptys statue glow with blue light. This stone orb is the Sceptre of the Leptys. However, the grimace ability is only a small aspect of the Leptys's power.

When André, the lord of the Black Lums, approaches the disgraced Reflux, he is able to persuade him to steal the Sceptre so that the two villains can use it against Rayman. André and Reflux travel to the top of the Tower of the Leptys, a tower which seems to have been constructed by the Knaaren in honour of their god. Once there, Reflux uses the Sceptre to invoke the full power of the Leptys. A portal to another dimension, also called the Leptys, appears in the sky. When Rayman arrives at the top of the Tower near the end of the game, he finds that Reflux has mutated, growing larger and more muscular as a result of his new powers. However, the Sceptre remains Reflux's one weakness throughout all stages of the following battle; in order to damage him, Rayman must find a way to strike at the Sceptre. This is similar to how he was defeated in the previous battle in the Desert of the Knaaren, when he used his own staff.

During the first stage of the battle, Reflux uses the Sceptre merely as a weapon, in the same way he used his staff in their earlier battle. He uses the Sceptre to summon lightning from the sky, to create magic shields around himself and to shoot projectiles which look strangely like Yellow Lums. Once Rayman hits the Sceptre enough times, the second stage of the battle begins; Reflux pulls the glowing orb of the Sceptre from its shaft and imbeds the orb into the flesh of his own back. This increases his powers tremendously; he grows to a colossal size, his fists becomes engulfed in flames, and he begins launching bombs from his back. He causes the upper stones of the Tower to begin levitating, the central parts of the floor become damaging for Rayman to stand on, and bluish pulses of energy begin to rise from the Tower upwards into the sky. Reflux now roars rather than talking, and his resemblance to a Knaaren decreases further. Once Rayman has hit the Sceptre enough, Reflux himself begins to levitate upwards, and Rayman must pursue him by climbing his levitating stone blocks. Throughout the climb, Reflux roars to fire circular blasts of damaging blue energy at Rayman. Eventually Rayman finds a Shock Rocket can; he uses it to attack the Sceptre once again. The fourth stage of the battle begins; Reflux sprouts wings, making his resemblance to the statue of the Leptys stronger than ever. He flies upwards into the portal in the sky, and Rayman follows.

The hero finds himself in the strange, alien world which was opened by the power of the Sceptre; again he must attack the Sceptre in Reflux's back as the latter pursues him and Globox in their flying Armaguiddon. In the fifth stage, Reflux rests, and André converts the energy from the Sceptre into Black Lums; these become an army of Hoodmongers, which are re-absorbed by Reflux to regenerate his health. The fourth and fifth stages alternate until Reflux is finally defeated; he freezes solid and shatters. It is not known if the Sceptre survived or if it was destroyed; as soon as Rayman uses the grimace granted to him by the Leptys to return André into a Red Lum, the alien world of the Leptys seems to disappear, and the heroes fall back to earth, landing in the woods near the Fairy Council. 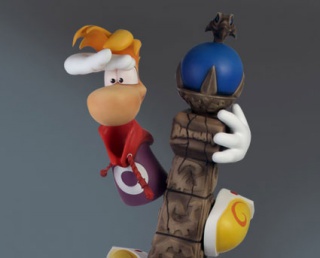 A figure of Rayman and the Sceptre of the Leptys.

A figure was produced to coincide with the release of Rayman 3. It depicts Rayman holding the Sceptre of the Leptys; it is perched atop its stone column, and the bird-headed tip of Gumsi's staff can be seen clamped to its top. A rare piece, the figure is most commonly found on display in gaming shops, but it is seldom for sale.