The Teensy Wizard is a Teensie wearing a typical Merlin-like wizard costume: a light blue shirt with dark blue stars, covered by a blue coat with light blue stars, and a conical wizard's hat topped with a star. Several early trailers suggest that he was going to be a main character in Rayman Origins, but he eventually became an unlockable skin; the Goth Teensy replaced him as one of the four initially available characters, in much the way the Green Teensy replaced the Grand Minimus. During earlier development, another Teensy Wizard was intended to make an appearance, with similar features, but an orange costume instead of blue; however, for unknown reasons he was scrapped, but still makes an appearance on the disc's cover. The Bubble Dreamer makes a possible reference to this orange Teensy Wizard, stating that the blue Teensy Wizard has a twin brother, and that the two tied for second place in last year's Snoring Competition.

Bless your noble nostrils! Aren't you one of the magical Teensy twins!? You guys tied for second in last year's Snoring Competition! Gratz! I laughed so hard at your schnoz-ballads that I fell off my perch...
—Bubble Dreamer, Rayman Origins

In Rayman Origins he is unlocked once 55 Electoons have been collected.

One of the magical Teensy twins, this Teensy is doing his best to become the world's greatest magician. He already has the outfit, which is a good start...
—In-game description, Rayman Legends, Rayman Adventures 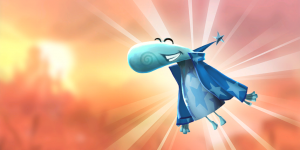 In Rayman Mini he is unlocked for 21 Swag Coins.