The Goth Teensy wears a black shirt with a red belt, a black coat with red edges, and a small conical black hat.

Goth teensy? What?! If you are here then who is watching the Dead Door?? Did the grannies get out? Should we call the nymphs...? No. You are on it? Oh, one of your bros is on it... Phew! Sorry, can't seem to keep you Teensies straight!
—Bubble Dreamer, Rayman Origins 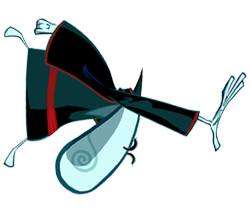 The Goth Teensy in Rayman Origins.

In Rayman Origins he is unlocked from the start of the game.

According to the Bubble Dreamer, he is the Teensy who takes care of the Dead Door, an entrance to the Land of the Livid Dead, preventing the escape of the Livid Dead. However, at the beginning of the story he is found irresponsibly taking a nap with his friends Rayman, Globox, the Grand Minimus and the Bubble Dreamer. Although the Goth Teensy is supposed to be the guard of the door, Mister Death apparently replaces him, but instead of preventing the escape of the Livid Dead, he just doesn't let anyone enter the Dead Door. The way in which the Goth Teensy inhales a small fly while snoring during the cinematic introduction of the game is possibly a reference to the first trailer of Beyond Good and Evil 2 (a game also developed by Michel Ancel), when Pey'j inhales a fly with his nose.

At the end of the game, when the heroes defeat the Magician, the Goth Teensy can be seen falling from the explosion with his friends. He lands on the same branch of the Snoring Tree, next to the Bubble Dreamer, where he was sleeping at the beginning of the game. Quickly, he and his friends go back to their deep sleep; the fly that he was inhaling at the beginning reappears, and with his snoring, he starts inhaling it again.

This Teensy's job is to watch the door to the Land of the Livid Dead. In the light of the recent events, I would say he's not very good at it...
—In-game description, Rayman Legends, Rayman Adventures

In Rayman Legends he is once again unlocked from the start of the game. He is seen at the beginning of the game sleeping along with Rayman, Globox and the Grand Minimus before being waken up by Murfy.

In Rayman Fiesta Run he is incorrectly named Ninja Teensy, which is the name of another Teensy. He can be purchased for 1 000 Lums.

In Rayman Adventures he can be purchased for 500 gems. 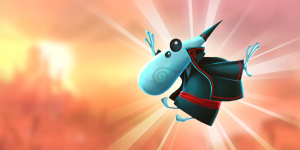 In Rayman Mini he is unlocked for 9 Swag Coins.