The First King, originally known as The First Grand Minimus is an unlockable Teensy character in Rayman Origins, Rayman Legends and Rayman Mini.

The First King was the first Teensy King in the entire line, but he retired, presumably due to old age or death. He is an ancestor of the younger Grand Minimus that appears in Rayman 2, Rayman 3 and Rayman Origins. The First Grand Minimus bears a strong resemblance to his descendant, but appears to be older, more decrepit, and zombified. He wears a gnawed grey crown, a purple coat with cyan edges, and a dark-green shirt; all of them apparently rotten. His skin is a darker blue than that of his descendants. His face is stubbly, he has a dark, skull-shaped mark on his nose, and his eyes are completely pink, without visible pupils. Despite his physical condition, he shares the exact moveset as the other playable characters. He acts as a dark counterpart to the Teensy characters, and in this sense he is comparable to DarkRay and Glombrox. He was initially revealed along with them in the game's Halloween trailer, walking like a zombie and trying to scare a Granny, who realizes their presence and quickly smacks them with her handbag.

Since the First Grand Minimus is the first of his line, it is possible that he is the son of Polokus and the muse of the poets, who are said to be the progenitors of the Teensie species.

In Rayman 3, Rayman encounters the Griskins, an entire tribe of undead Teensies; however, these are ghostly creatures, whereas the First Grand Minimus is apparently a zombie.

The First Grand Minimus, the worse for wear... Thanks for guarding the heart of the world all this time, old chap! I hereby retire you! Go see the world! What do you mean, 'you're still on duty'? I saw you sleeping on the job! Now go finish your bucket list! Gesundheit!
—Bubble Dreamer, Rayman Origins

In Rayman Origins he is unlocked once 95 Electoons have been collected.

This fellow was the very first king of the Teensies a long time ago. A spell brought him back from his grave and now he spends his time droning on about how things were better back in the days...
—In-game description, Rayman Legends

In Rayman Legends he is unlocked once 750 000 Lums have been collected on the PC, Xbox 360, PlayStation 3, PlayStation Vita, PlayStation 4, Wii U and Nintendo Switch version and 830 000 Lums on the Xbox One version. 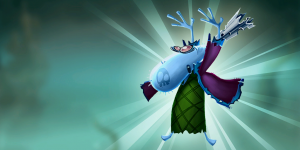 The First King as he would have appeared in Rayman Adventures.

In Rayman Mini he is unlocked for 23 Swag Coins.