Polar Pursuit is the first level of the Gourmand Land, the third world in Rayman Origins. In this first level of the world, the heroes will slide on slippery icy platforms, while avoiding red water infested with Baby Piranhas. They also meet the third nymph, Edith Up. The PlayStation Vita version of Rayman Origins features a Ghost Mode of this level. This is the first level from this world, and the tenth overall that's not included in the Back to Origins painting in Rayman Legends.

The heroes start out by sliding on curvy icy platforms, some collapse on themselves into the safe water. As they proceed, they will need to swim in a long body of water, with eleven Darktoons flying towards them. If the heroes manage to bounce on all eleven without falling into the water, the Boing! Boing! Boing! trophy/achievement will be unlocked. The first Skull Coin can be collected by bouncing on the eighth Darktoon and gliding to collect the coin. Eventually, the heroes approach a blue Al Tranquilo; it will will spit out a geyser of green liquid if the heroes stand on its belly, which they can use in order to reach the exit.

The heroes proceed, while sliding on more icy platforms. Eventually, they come across some red bodies of water that contain hungry Baby Piranhas; it can be very difficult to escape the Baby Piranhas if the heroes fall into the water. They will need to avoid the red water by using creatures, including forks with lemons attached. Afterwards, the heroes can reach the exit by quickly moving on icy platforms, which will crush them if they stand still for too long. The second Skull Coin of the level can be found right above the exit; the heroes can perform a walljump in order to reach it. 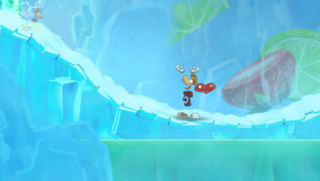 The first relic can be found directly above Rayman.

The first relic can be found in this area, camouflaged inside a lime in the background.

The second relic can be found inside the watermelon.

The second relic can also be found in this area; it is hidden inside a watermelon.

Upon entry, the heroes encounter the third nymph, Edith Up, and just like the previous two, she is held captive by a Darktoon. Once the Darktoon spots the heroes, it will run away, meaning the heroes will need to chase it through the icy area. They will need to avoid more bodies of red water infested with Baby Piranhas by jumping off sinking icebergs. The third Skull Coin can be obtained by taking a higher path in the area. The fourth Skull Coin can be found close to a Lum King at a lower platform near the red water. Eventually, the heroes can defeat the Darktoon and free Edith Up; gaining the power to change size. The fifth Skull Coin can be found hiding behind a foreground icy glacier. The heroes can now use their new power in order to reach the exit. 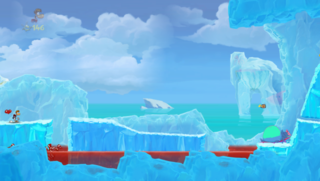 The third relic can be found in the foreground directly below Rayman.

The third relic can be found in this area, hidden inside an iceberg in the foreground. This one must be collected quickly, as the heroes are currently in pursuit of a Darktoon in order to rescue Edith Up.

As the heroes enter, an Electoon cries for help; the first secret area can be found by performing a walljump, in order to reach the icy platform above. Once the Electoons have been saved, the heroes can proceed, using the shrink power to get through tight spaces. The sixth Skull Coin can be collected by coming into contact with a Palmito; the coin will be released in a bubble, and will move slowly towards the Baby Piranha filled red water, so the heroes will need to be quick in order to collect it. The heroes can use a funnel to morph back to their normal size and proceed to the exit. 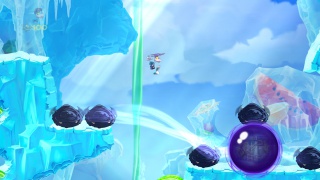 The five Darktoons in the secret area.

The heroes will need to defeat five Darktoons around the Electoon cage, using limes in order to reach the higher platforms. Once the five are defeated, the cage can be broken. 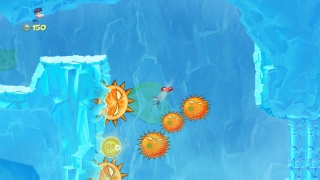 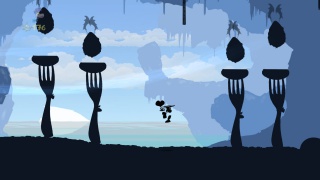 The heroes morph back to their normal size upon entry. They must defeat the Darktoons which are bouncing on lemons that are attached to forks. Once all have been defeated, the cage can be broken. 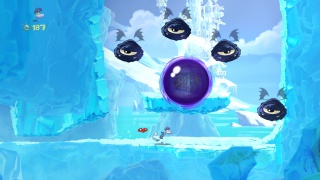 The sixth and final area.

All the heroes will need to do, is defeat the Darktoons hovering around the Electoon cage. Once they have been defeated, the cage can be broken, ending the level; the heroes pose on the photoboard, as the Magician waits for the total amount of Lums that were collected throughout the level.