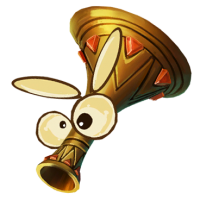 A funnel, as it appears in Rayman Origins.

Funnels are creatures who inhabit the Gourmand Land in Rayman Origins. When the heroes free Edith Up, she grants them the ability to change size. However, to use this ability the heroes require the help of funnels or funnel-shaped tunnels. If characters jump into a funnel's mouth, they will be quickly pushed by the funnel's airstreams and shot into the air with a different size. When smaller, characters can reach smaller areas impossible to access with a bigger size, and can do a dash attack, which they can use to attack enemies or boost themselves. If done correctly, players can scale a wall by doing constant walljumps and dash attacks; this is can be useful to avoid falling into a cliff. Funnels made a return in Rayman Legends in Fiesta de los Muertos.

Funnels' fly-like wings, squinting eyes and their ability to change the player's size make them highly resemble the flying blue elves from the original Rayman game. They also behave much like pencil sharpeners seen in the Game Boy Advance version of Rayman Raving Rabbids.

In concept artwork, funnels were going to not only shrink heroes, but enemies as well. Funnels were also going to be able to transport players into the backgrounds. Players were to enter through one funnel and exit to a connecting one in the background, shrinking in the process.