A fork in the original Rayman game.

In the original Rayman game, forks only appear in the Atari Jaguar version. Only the top part of the fork can hurt Rayman. 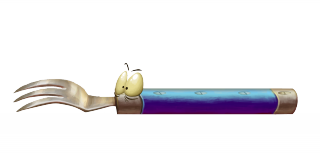 A fork, as it appears in Rayman Legends.

Forks are utensil enemies in the Infernal Kitchen, an area of the Gourmand Land, together with knives and spoons. They will attack the player if they pass through the red laser. They can't be defeated and have to be avoided. These creatures appear in Piping Hot!, Aim for the Eel and Dragon Soup.

The forks also appear in Spoiled Rotten from Fiesta de los Muertos, along with the knives. Here, their handles are now brown, and they don't have eyes. They appear sticking out of food, and can only hurt the player through direct contact.