The Slapdash is dumb beyond belief, even for a Hoodlum. He never did understand that the staff order "to gain the upper hand" is a figurative expression.
—In-game description, Rayman 3

For Slapdash, we wanted to create a fat moron. So we made him a nice bright strawberry colour and gave him a vacant look and a fairly oafish physique.
—Character designer Stéphane Zinetti, RaymanZone interview

Slapdashes are Hoodlums armed with a boxing glove on a wooden stick that appear in Rayman 3 and Rayman: Hoodlums' Revenge.

The Slapdash is not only the weakest member of the Hoodlum army, as it can be defeated with one single shot, it is also the least intelligent. These Hoodlums are traditionally branded the lowest form of Hoodlum soldier and are thus only given a stick with a boxing glove as an attacking weapon. In appearance, the Slapdash wears a bright red gown. 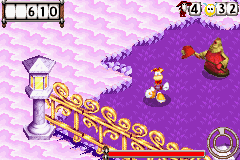 A Slapdash in Rayman: Hoodlums' Revenge.

Two of these Hoodlums are primarily seen raiding the Fairy Council with a Hoodmonger in the second part of the level. Later in the game these enemies often appear in small formed groups, usually at camps with other types of Hoodlums.

They also have the unique ability to spring out of nowhere when Rayman approaches them, taking him by surprise. Despite being seen moving in one of the Fairy Council's cutscenes, they always remain static in-game. Their only weapon is a boxing glove attached to the end of a stick, which is used both to crudely swipe the victim if they come too close, or to fire boxing gloves from longer distances. Its functioning, therefore, is more complex than it may seem at first.

In Rayman: Hoodlums' Revenge, Slapdashes can move and only attack Rayman by swiping their weapon when he is close enough. 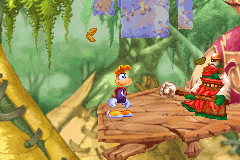 An armoured Slapdash in the Game Boy Advance version of Rayman 3.

An enemy with a Grim Keeper's body and a Slapdash's boxing glove appears in Hoodlum Hideout in the Game Boy Advance version of Rayman 3. It wanders around on its platform until it sees Rayman and attacks. Its attack consists of charging into Rayman like Bégoniax, which he must jump over in the same fashion. When the Hoodlum's back is turned to Rayman, he must punch it. Punching it twice causes the Hoodlum to be defeated.

An abandoned design for the Slapdash.
Retrieved from "https://raymanpc.com/wiki/script-en/index.php?title=Slapdash&oldid=82623"
Categories: