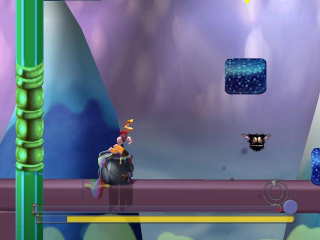 When Rayman was younger, he only had two dimensions.
—In-game description, Rayman 3

2D Nightmare is the last of the three minigames which are exclusive to the Nintendo GameCube version of Rayman 3. It was intended to unlock upon connecting a Game Boy Advance to the GameCube, running a copy of Rayman 3 with all levels completed. However, due to a programming error, the game doesn't see the final level, Heart of the Ancients, as complete, rendering it impossible to unlock the minigame without cheating.

2D Nightmare is a flashback to the original Rayman game in the same style as 2D Madness. 2D Nightmare, however, takes place in Picture City, whereas 2D Madness takes place in the Dream Forest. Extensive use of the Throttle Copter power-up makes it reminiscent of the second section of Pencil Pentathlon, in which the super helicopter power was used.

In 2003, a screenshot of 2D Nightmare was posted in an official RaymanZone gallery; when the forums were deleted, the image was lost and the minigame's existence was called into dispute. In November 2010, the screenshot was finally located. Inspections of the files on the disc of the PC version of Rayman 3 confirmed 2D Nightmare's existence and name, and revealed that it had once been planned for inclusion in the other versions of the game, along with a chess minigame and a minigame in which the player controls a Xowar which is chasing Rayman. The existence of 2D Nightmare was further supported by the presence of a 12th minigame slot at the bottom of the minigame menu in the GameCube version of Rayman 3.

Eventually it was found on March 30th, 2016 that the game is supposed to unlock when every level in the Game Boy Advance version is completed. Unfortunately, the variable tracking the number of completed levels is not incremented after the final level is completed, meaning that it never reaches the value that the GameCube version expects in order to unlock the minigame. The minigame can therefore be unlocked by raising the variable manually in the Game Boy Advance version through a cheat program.

Two other GameCube-exclusive Rayman 3 minigames exist. Mad Trax is a two-player kart-racing game, in which one player, controlling Rayman with the GameCube controller, races around an area in a similar fashion to the game's Crazy Shoe sections, collecting gems, and the other player, controlling Globox, arranges the race-track by playing a Tetris-like game on the connected Game Boy Advance. The other minigame, Wheelis, is similar, but it involves four players; two controlling Rayman and Gumsi in Crazy Shoes, and two playing the Tetris-like game on the Game Boy Advances. Both Mad Trax and Wheelis have been unlocked successfully by obtaining enough points in the GameCube version.

After entering the code, load any saved game and the minigame will appear in the Bonus menu.