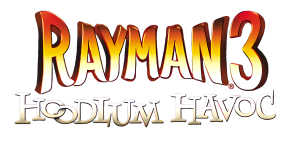 Rayman 3 underwent numerous changes during its development. This page notes findings in regards to said changes in development, and early visual items, such as screenshots and artwork.

Rayman 2000 was a video game project that would serve as a direct sequel to Rayman 2.

Its development began shortly after the release of Rayman 2, but was canceled. Several of his concepts were reused for Rayman 3. 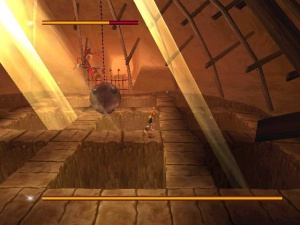 Rayman had at least 4 designs during game development. First it had to appear as in Rayman 2, a design similar to Rayman 2 with a yellow scraf and new shoes, a design similar to Rayman 3 with a yellow hood and shoes as in Rayman 2, until he got to his final design. Other early elements include unused areas, such as an underwater level, and differences with the HUD, which resembles the HUD of Rayman 2 in some early screenshots. Some screenshots appear fairly similar to the final game, but still show some differences in aesthetic and lighting. There was also several kinds of Hoodlums that were going to appear, but got scrapped from the final game.

The third and fourth parts of the Bog of Murk appear to have originally been the same map, but ended up being separated. Both parts retained a prototype copy of the other where only a few gems are present, elements like meadowscrews are non-functional, and there are no enemies or cages. These areas can be accessed in-game with hacks or glitches.

There are two debugging features mistakenly left in the GameCube version of the game. The first one is in the first part of the Fairy Council: holding R + Start will cause Murfy to stop flying until the player lets go. The second is in the fourth part of the Desert of the Knaaren: pressing the same buttons will cause the text "Salle 01" (French for "Room 01") to appear in the bottom left of the screen. If the player then holds the R button and presses Up or Down on the D-Pad, the number can be changed up to 05. Holding R and pressing Left on the D-Pad will then cause Rayman to be teleported to a specific location, depending on what number was displayed.

According to scrapped dialogues found in the beta demo's game files,[1] the early plot differed significantly from that of the final game. Notable differences are, among others:

There were plans to have a level included in the game known as the Aquatic world. It was scrapped before its official name could be revealed.

There were two minigames that were cut from the final version. One is called the Chess minigame. It was scrapped before its real title name could be revealed.

The other minigame, which also can be found by examination of the game's disc, is called the Xowar minigame. Like the previous minigame, it was scrapped before its real title name could be revealed.

Concept art of creatures that did not make to the final version of the game.

A Bonton appears in the Xowar secret in the Tower of the Leptys.

Clark was originally intended to appear according to L'Histoire de Rayman.

A glute also appears in the Xowar secret in the Tower of the Leptys. 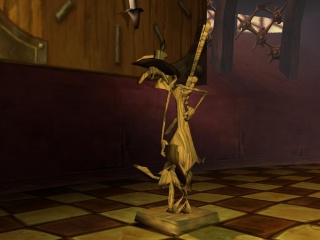 A statue of Razoff and the scrapped Goaty.

A Goaty was originally going to appear in the game, but it was scrapped to avoid overloading the universe with creatures. Despite this, the Goaty makes a cameo as a statue in Razoff's mansion.

One of several scrapped Hoodlums, the Gunslinger Hoodlum was planned to appear in the game.

Another of the scrapped Hoodlums, Hoodloons do appear in the game as background objects in the Summit Beyond the Clouds.

A carnivorous plant called Hoover, was planned to be an enemy in the game. It was cut for unknown reasons.

A variety of Hoodlums that were supposed to be in the game called the Kagoubinôme were scrapped from the final release.

Ly makes a cameo appearance in the Longest Shortcut, though the presence of concept art showing a redesign might imply an intended larger role. 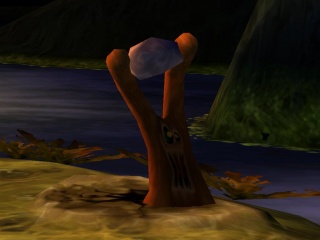 A Muddibog in the Bog of Murk.

Muddibogs appear as enemies in the final game, but a giant variant was scrapped.

Scaleman appears in the Game Boy Advance version of Rayman 3.

A pair of twin Hoodlums naturally called Siamese Hoodlum, was completely removed from the game.

A background creature called Snoot was supposed to appear, but was scrapped like the Goaty and Snorty, to avoid overloading the universe with creatures.

The third of the creatures that were cut from the game to avoid overloading the universe with creatures, is called Snorty.

A Wooglah would have appeared in the game as a helper to Rayman and Globox in terms of advancing to other worlds, but it was scrapped for unknown reasons. 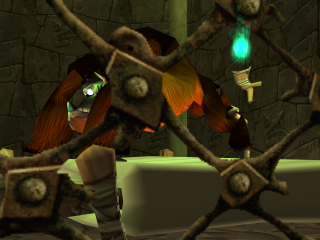 The Xowar in its cell in the Tower of the Leptys.

The Zaqs were supposed to be in the game, but was later cut due to time constraints. 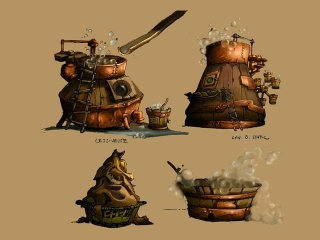 The Lav-O-Matic was intended to appear in the Aquatic world along with the Zaqs, but all were scrapped due to the levels 'lacked rhythm' compared to other levels.

An unused object that appeared to contain a plum was discovered by hacking the game.

The preservation website Hidden Palace played this prototype on its Twitch channel along with other prototypes,[2] and later made them available for download on its website.[3]

Through the use of export tools, several files have been discovered:

Rayman Pirate-Community user DandyGuy dumped a Rayman 3 PlayStation 2 development disc online and it appears to be built on October 27, 2002. This build contains six levels each having a simple debug name and the build contains a few differences closely resembling the final game.

The level 'Intro. 10' is the first section of the Fairy Council with Murfy carrying Rayman with no arms, this version of the sections has a different voice for Murfy and he had different lines.

'SK8.00' is the debug name for the first Teensie Highway which has some minor differences compared to the final game.

'Wood. 19' Contains two segments of Clearleaf Forest, the first being the segment that introduces the player to the Shock Rocket, and the following segment involving the same segment that was used in the 2002 demo.

'MOOR. 60' Contains a segment from the Land of the Livid Dead where Rayman must free the 3 Teensies and open the door to access the second Teensie doctor.

'Flash. 10' Contains the final segment of the Longest Shortcut

'Tower .30' contains the final section of the Tower of the Leptys and is almost exactly similar to its 2002 demo counterpart.

Several unused textures can be found in the files.

The following textures are for an unused early menu, resembling that seen in the GameBoy Advance version of Rayman 3.

Here are the same menu textures, but with the alpha channel removed. 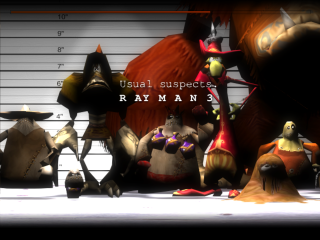 Several of the enemies in Rayman 3 including the scrapped Xowar appeared on this early PC version loading screen.

In 2002, some platinum copies of Rayman Revolution were bundled with a demo disc of Rayman 3 and these were identified with a sticker in the front cover. There were other Rayman games games for PC that bundled the same demo too, along with a few other demos featuring different levels than the ones seen in the PlayStation 2 version. This demo featured some differences:

This game mode is available in the Rayman 3 demo, released in 2002. It contains a sequence of the third section of the Clearleaf Forest. Many differences can be found between this version and the level of the final version. Some additional differences appear in the PlayStation 2 version. Like the musics played when Rayman is in fight with the Hoodlums. Before the first secret entrance of this sequence, it was initially expected that a flag representing the Hoodlum camp appeared, but it was instead replaced by a flag representing a Hoodmonger. In the PC version of the demo, the pigpots' previous design is used. 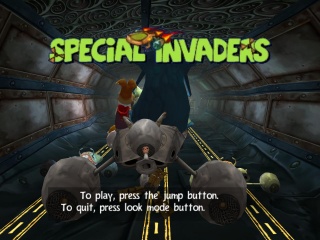 Special Invaders, as seen in the final version of Rayman 3.

This game mode is also available in the Rayman 3 demo. It contains the third section of the Tower of the Leptys. Between the beta and final version of this section, the most striking differences are the sounds and musics. Some dialogs had not yet been added to the game, such as those of Globox and Rayman during the cinematic of the section. Globox does not call Rayman to get aboard his Armaguiddon but honk to get him. Also, he doesn't say anything about the enemies and do not compliment the buildings. But he is frightened at the sight of the stone gaps, when he's with Rayman in the room where they are located, Globox yells : "Ah! A mixer!". The name given to this game mode was finally used for a mini-game in the final version of Rayman 3. The name of this game mode refers to a classic, Space Invaders'.

The trailer of the demo is different in the final version of Rayman 3.

For example, in the trailer of the demo, the old design of the Hoodmonger Officers is used. Their design looks like the Hoodmonger's one, but they wore chain mail and a kind of metal bulletproof vest.

Some early game assets have been found in the files of the demos.

Logos included in the press kit

In the PAL version of the GameCube version there exists unused Game Boy Advance ROMs for the minigames which would have the player connect their GameCube to their Game Boy Advance to play them. There are 3 of these ROMs, with the first one being an early version of the Mad Trax and Wheelis minigames, with early sprite artwork. The other two are completely unused and feature a different map and sprites.

In the PlayStation 2 version of the beta in Dangerous Game, only the first music of the Hoodmonger Soldiers is used.