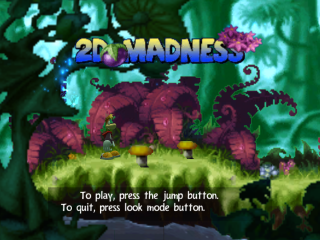 The title screen of 2D Madness.

Sometimes Rayman remembers being a kid, when everything was in 2D.
—In-game description, Rayman 3

2D Madness is the first of the nine minigames which can be unlocked and played in every version of Rayman 3. In most versions of the game, it is unlocked by earning 1,000 points; in the GameCube version, it is unlocked by connecting a Game Boy Advance with the Rayman 3 cartridge inside, then visiting the GameCube connection screen with a 100% complete save file on the Game Boy Advance.

This minigame is a tribute to the original Rayman game, and seems to take place in the mind of Rayman as he nostalgically reminisces about his past adventures. The player controls a 3D, Rayman 3-style Rayman and must manoeuvre him through a single side-scrolling level. He can run, walk, jump, punch and kick, but using the Rayman 3 physics engine. This makes platforming somewhat more difficult than in the original game, as Rayman decelerates whenever he jumps and cannot make subtle movements. A subtle 2.5D effect is present, as Rayman has a very small amount of Z-axis movement; several jewels take advantage of this and require Rayman to walk "into the screen" in order to obtain them.

The environmental surroundings are clearly identifiable as the Dream Forest, the first land Rayman visited in the original game. Throughout the level, Rayman must overcome obstacles such as swinging red spiky fruits, mosquitoes (who fly back and forth holding more red spiky fruits) and Slapdashes, the only Rayman 3 enemy to appear. They turn into Black Lums and flee when defeated. Clouds with faces appear, but they are larger than the ones from the original Atari Jaguar game and bounce (with a Rayman 3 sound effect) when Rayman lands on them, rather than simply vanishing. Many background plants, including flowers, mushrooms, plums, lianas and trees look almost exactly as they did in the original game. As Rayman moves through the level, he must collect enough of the red, yellow and green jewels scattered throughout it to deplete the yellow ‘enemy health’ bar at the bottom of the screen; otherwise his completion of the level will not count. All the while, sparkling blue Rayman 3-style butterflies flutter about him. At the end of the level, Rayman helicopters down into a room which appears to be a film studio filled with Rayman 1 memorabilia, including the Photographer's board, several clouds with faces hanging on a wall like props, an exit sign, and several posters or boards showing images from the original game, including an image of Rayman as he appeared on the game's cover, the intro's shot of Mr Dark observing Rayman through his binoculars, and the scene from the game's ending where all the characters are shown together.